The Duke of Edinburgh, who is 95, will no longer carry out public engagements from the autumn of this year, Buckingham Palace has announced.

Prince Philip’s decision was taken with the support of the Queen.

He will attend previously scheduled engagements until August but will not be planning any more. 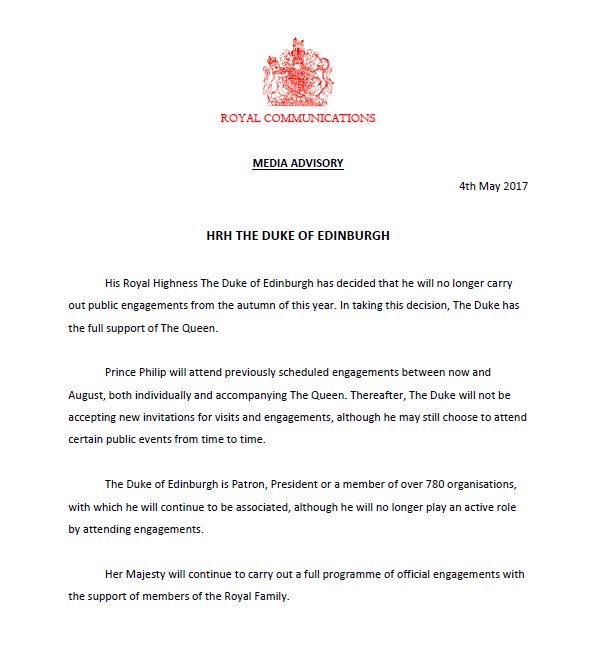 Only yesterday he attended Lord’s cricket ground where he opened the sporting venue’s new Warner Stand.

Prince Philip, 95, at Lord’s cricket ground, uttering one of his favourite lines:

His Royal Highness The Duke of Edinburgh has decided that he will no longer carry out public engagements from the autumn of this year. In taking this decision, The Duke has the full support of The Queen.

Prince Philip will attend previously scheduled engagements between now and August, both individually and accompanying the Queen. Thereafter, The Duke will not be accepting new invitations for visits and engagements, although he may still choose to attend certain public events from time to time.

The Duke of Edinburgh is Patron, President or member of over 780 organisations with which he will continue to be associated though he will no longer play an active role in attending engagements.

Her Majesty will continue to carry out a full programme of official engagements with the support of members of the Royal Family.

Prime Minister Theresa May said: “On behalf of the whole country, I want to offer our deepest gratitude and good wishes to His Royal Highness the Duke of Edinburgh following today’s announcement that he will stand down from public duties in the Autumn.

“From his steadfast support for Her Majesty the Queen to his inspirational Duke of Edinburgh Awards and his patronage of hundreds of charities and good causes, his contribution to our United Kingdom, the Commonwealth and the wider world will be of huge benefit to us all for years to come.”

Jeremy Corbyn said: “I would like to pay tribute to Prince Philip following his decision to retire from public service.

“He has dedicated his life to supporting the Queen and our country with a clear sense of public duty.

“His Duke of Edinburgh’s Award scheme has inspired young people for more than 60 years in over 140 nations.

“We thank Prince Philip for his service to the country and wish him all the best in his well-earned retirement.

The announcement comes after a morning of fevered speculation after reports that the Queen’s entire household had been called to Buckingham Palace in a “highly unusual” move.

There was intense speculation as to what the meeting was about and a huge media presence assembled at the palace.

But rumours of a death or announcement of an abdication were tempered by a source who spoke to Reuters saying: “There’s no cause for alarm.”

The Queen turned 91 last month while her husband will celebrate his 96th birthday in June.

Both cancelled a number of engagements over the Christmas period due to “heavy colds”.

Prince Philip is known for his active, healthy lifestyle but has suffered from a number of health problems in recent years.

He spent five days in hospital after being taken ill following the pageant along the River Thames in 2012.

He spent Christmas 2011 in hospital being treated for a blocked coronary artery.

Previously most of Philip’s ailments and injuries have been sports-related.

He suffers arthritis in his right wrist from playing polo and tried to dull the pain with Butazolodin, a drug more usually given to lame horses and recommended by his head groom. It was reported he later stopped taking it because of the side effects.

In 1961, he broke a bone in his left ankle in a collision on the polo field and in 1963, again playing polo, he suffered a gash to his left arm which needed three stitches.

The Duke was X-rayed in 1964 after a fall from his polo pony when he pulled a ligament in his left shoulder.

The Palace announced the Duke planned to step down as president or patron of more than a dozen organisations ahead of his milestone birthday in 2011.

Born Prince Philip of Greece, he married Queen Elizabeth II at Westminster Abbey in 1947 in front of 2,000 guests.

Another 200 million people listened to the radio broadcast of the nuptials and thousands lined the streets to watch the spectacle.

Trump tells Italy: Get rid of ‘EU burden’ and I will give you tariff discount

Theresa May’s seven days to save her Brexit deal