British house prices fell for a second month in a row in April, suggesting households are feeling the pinch from rising inflation since last year’s Brexit vote and low wage growth.

Nationwide said house prices declined by 0.4pc in April following a fall of 0.3pc in March, which had been the first fall since mid-2015.

“While monthly figures can be volatile, the recent softening in price growth may be a further indication that households are starting to react to the emerging squeeze on real incomes or to affordability pressures in key parts of the country,” Nationwide economist Robert Gardner said.

Economists polled by Reuters had expected house prices to rise by 0.1pc in April from March and by 3.3pc in annual terms.

It came as Government figures showed stamp duty revenues are up 16pc in the first quarter of this year compared to the same period in 2016, which was boosted artificially by the surge in purchases to avoid the 3pc hike for buy-to-let properties.

But this rise was dependent on the extra revenue from this increase in stamp duty; without it, receipts would be far lower, and they represent 23pc of the total.

Lucian Cook, head of residential research at Savills, said: “Investment and second home purchases among cash rich buyers have continued to be much stronger than expected, even though mortgaged buy to let investment has taken a hammering.” 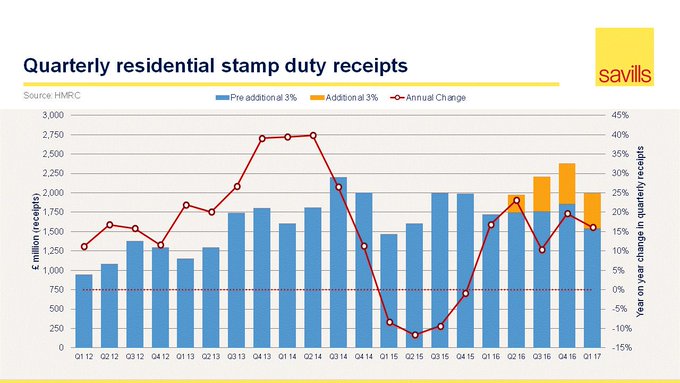 The British Bankers’ Association also said that the number of mortgages approved in March was lower than expected, down 2.8pc on February’s total, and marks the second successive month of falls.

Use regions/landmarks to skip ahead to chart.

“‘Bearing in mind the long run of house-price rises last year the market had to hit the buffers sooner or later, irrespective of the general election and Brexit.

“What we are seeing is homebuyers reaching an affordability ceiling and saying ‘no more’. Unless buyers and sellers recognise that the market is not what it was 12 months ago, further inertia and falls in transactions will result.”

Mortgage rates have continued to fall in recent weeks. Atom Bank launched the lowest-ever mortgage rates two weeks ago charging as little as 1.29pc for a five-year deal.

This was followed by Yorkshire Building Society, which launched the lowest ever mortgage rate – at 0.89pc. However, to be eligible for the two-year mortgage home owners must have at least a 35pc deposit.

Jonathan Harris, director of mortgage broker Anderson Harris, said that while mortgage rates are falling, changes to mortgage rules mean it is harder for buyers to overstretch themselves.

“Lenders are tough on affordability and ensuring borrowers can afford their mortgage, both now and in the future should rates rise, so there is a limit on the amount of borrowing people can take on. If this means people are not able to pay more than a house is really worth, than that will have an impact on property prices,” he said.

How to choose a greenhouse