SIX people have been killed and at least 48 injured after three terrorists mowed down pedestrians on London Bridge and then went on a stabbing rampage.

According to Prime Minister Malcolm Turnbull, there are reports that two Australians were caught up in the attack.

“At this time we are aware of reports of two Australians who have been directly affected by this attack,” Mr Turnbull said.

“This afternoon the Foreign Minister has spoken to the parents of both Australians. One case has been confirmed and the Australian concerned is in hospital. In the other case, we are continuing to make inquiries.”

A van was seen ploughing into pedestrians at London Bridge before continuing to the nearby Borough Market.

Three terrorists — reportedly wearing stab proof vests — then emerged from the van and began the stabbing attack. Witnesses report seeing some of the victims had their throats cut.

Eyewitness Will Heaven, who arrived at the scene in the immediate aftermath of the attack, said he saw someone lying on the pavement on London Bridge.

“Just after ten past ten, I was in the back of a taxi coming over London Bridge,” Mr Heaven told news.com.au.

“[I] saw someone on the lefthand side lying on the pavement with a crowd around.”

Metropolitan Police Commissioner Mark Rowley said they were not “100 per cent” sure all the attackers had been stopped.

“Armed officers responded very quickly and bravely, confronting three male suspects who were shot and killed in Borough Market. The suspects had been confronted and shot by the police within eight minutes of the first call,” he said.

A British Transport Police Officer was among those seriously injured who were taken to six different hospitals in the capital.

The area remains under a cordon that stretches miles across the city. Picture: Photo/Matt Dunham.Source:AP

Speaking to the media, London’s Mayor has sent a message to “evil cowards” who commit acts of terror, telling them “we will never let them win”.

“There aren’t words to describe the grief and anger our city is feeling,” Sadiq Khan said.

“I’m appalled and furious that these cowardly terrorists deliberately targeted innocent Londoners and visitors enjoying their Saturday night. I condemn unequivocally these terrorists in the strongest possible terms. They are evil cowards and London will never be cowed. We will never let them win.”

The three male terrorists were gunned down at Borough Market within eight minutes of the first emergency call. The incident began at 10.08pm local time (7.08am AEST).

Witnesses heard one of the attackers scream “this is for Allah” as a young woman was stabbed.

Mr Rowley said what appeared to be explosives — seen on the body of at least one suspect — had been “established to be hoaxes”.

Security around London will be beefed up in the coming days ahead of the general election on Thursday. The UK Prime Minister will chair an emergency meeting on Sunday morning.

“We are reviewing and planning to strengthen our policing stance across London over the forthcoming days, and there will be additional police and officers deployed across the Capital,” Mr Rowley said.

The attacks happened just 12 days after the atrocity at Manchester Arena where 22 people died, and 10 weeks after the terror attack at Westminster that killed five people.

One horrified witness had told The Sun he was left covered in blood after a man stormed a restaurant and slashed diners.

Jag Sandue was at the Black and Blue steak restaurant when he said he saw several men storm in, armed with knives.

Armed police stand over what is believed to be a suspect shot at the scene of a terror attack outside Borough Market in central London. Picture: Gabriele SciottoSource:AFP

A victim from the Borough Market is taken away on a stretcher. Picture: APSource:AP

He said a man was cut down behind him, with blood spraying onto Jag’s shirt.

“There were people throwing chairs and glasses outside and I thought it might just be a fight. Then I realised it was more than that, people were running.

“Next thing we know, they’re in our restaurant. People were screaming ‘they’ve got knives’.”

British Prime Minister Theresa May confirmed the incidents were being treated as acts of terrorism. Mrs May, who has been campaigning ahead of a general election on Thursday, was returning to Downing Street to chair an urgent national security meeting.

Police in riot gear filled the streets and told pedestrians and reporters to run and leave the area as fast as possible.

Map of London where the attacks have been reported.Source:Supplied

Police tweeted the “run, hide, tell” message, suggesting there are other attackers still at large, but those fears now appear to be unfounded.

Explosions heard near The Shard skyscraper in London Bridge were controlled explosions by police who were destroying suspicious items.

Gabriele Sciotto captured the image that appears to show a terrorist with canisters strapped to his body on the ground.

Sciotto told the BBC: “I noticed this man with this explosive looking belt on his chest … They were running [and a] police officer was trying to put himself between them and the crowd. After that they were almost coming towards me, I tried to run away, and they were heading towards the main street.”

He then watched as police shot the three men dead.

Debris is strewn outside a cafe near London Bridge. Picture: Getty ImagesSource:Getty Images

Sky News quoted a witness who said an attacker was heard screaming the words “Allah” as he began stabbing a young woman. The witness, identified as Gerard, said he and others were powerless to stop the knifeman and told of hearing the female victim scream out for help.

“I couldn’t do anything … I threw a stool, a chair and they ran towards me and I ran away. If I slipped and fell I would be dead right now,” Gerard said.

Witnesses said a white van veered off the road and hit five or six people at London Bridge. Deputy Editor of The Sunday Times, Sarah Baxter said: “Several pedestrians mown down as van weaved across road.” At least three people reportedly got out of the vehicle and started stabbing.

Those caught up in the attack mixed with late night revellers who at first, did not understand the confusion.

People were throwing beer glasses and chairs at attackers to stop them entering pubs and restaurants in Borough Market while customers cowered in fear in the kitchens and staff quarters of restaurants.

The BBC reported one eyewitness told of seeing a man wearing a “canister” around his waist and with a long knife. The witness said he was in a bar at the time and tried to throw chairs at the attackers to stop them.

An armed Police officer looks through his weapon on London Bridge. Picture: PASource:AP

A police officer escorts members of the public to safety at London Bridge. Picture: GettySource:Getty Images

One witness told Reuters that she saw what appeared to be three people with knife wounds and possibly their throats cut. Another told Sky News there had been “significant gunfire” heard in the area.

Witnesses told media the attackers appeared to have knives that had blades of 10-12 inches.

Nick Archer, who was in the London Bridge area, says he came out of a bar and looked to his left and saw a man lying on the ground. He thought the person had been drinking, but then police vans flew by.

As the sun rises, the grim reality sets in #LondonAttacks

Terror on the Sunday Times doorstep

One reveller was stabbed five times, a witness said.

A 40-year-old witness told The Sun: “I was in the Wheatsheaf pub. The doors were locked by the bar staff. Three men with big hunting knives were outside.

“They were trying to get in the pub but the doors were locked. They were smashing the windows.

“I saw at least one man stabbed in the chest about five times.”

Armed police then shot two of the attackers.

“They had four to five silver canisters attached to themselves and police just opened fire.

“They fired at least 20 times. One of the guys in the pub took a bullet in the head. I think he’s dead.” 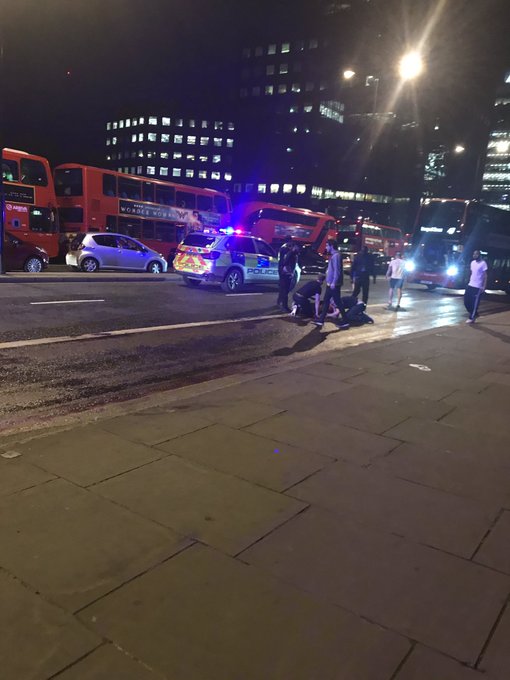 Serious incident on London Bridge. Several people being tended to by paramedics

‘A DELIBERATE AND COWARDLY ATTACK’

Witness Tony Murphy, who lives opposite Southwark Bridge, said he heard “significant gunfire” that he thought was fireworks at first.

“It was significant gunfire, it went on for quite a few minutes. Other people would have thought it was fireworks but I recognised it immediately.”

“It was sufficient for me to get out of the chair … that was before there was any police response.”

Live video showed people streaming out of bars in the area with their hands raised above their heads. Another video circulating on social media showed people in a bar ducking for cover as police stormed into the building.

Thousands of people are in the area that is now sealed off by heavily armed police. Officers are checking people, some of whom have their arms raised, before they are allowed out of the cordon.

Residents have been told not to expect to be allowed home for several hours.

A third incident at Vauxhall was initially feared to be part of the attack but police said it was unrelated.

The Mayor of London, Sadiq Khan, said his thoughts were with everyone involved and thanked the emergency services for their bravery.

“We don’t yet know the full details, but this was a deliberate and cowardly attack on innocent Londoners and visitors to our city enjoying their Saturday night.”

The Home Secretray, Amber Rudd, condemned the “appalling” attack and said she was proud of the response of the emergency services.

Prime Minister Malcolm Turnbull said his thoughts and prayers “and resolute solidarity are today as always with the people of Britain in the face of the shocking terrorist attacks in London”.

No Australians were believed to be caught up in the attack

Three separate incidents have been reported in London.Source:AP

An armed police stands on Borough High Street as police are dealing with an incident on London Bridge in London, Saturday, June 3, 2017. Witnesses reported a vehicle hitting pedestrians and injured people on the ground. (Dominic Lipinski/PA via AP)Source:AP

Members of the public were told to run away as fast as possible. Picture: Dominic Lipinski/PA via AP)Source:AP

Senator Sam Dastyari, who had been speaking to London Mayor Sadiq Kahn about terrorism earlier in the day, said he was having dinner near London Bridge at the time of the attack.

“We heard screaming — You could obviously tell there was an incident and someone starts running past, obviously covered in blood, kind of down the street,” Mr Dastyari told the ABC.

“It takes you a moment to register whether or not obviously if it’s a bar fight gone wrong or that kind of thing — you don’t know whether it’s anything more serious than that.”

A witness told the BBC she saw a speeding white van veering into pedestrians. A white van was later filmed on the street with the doors open surrounded by police.

The witness said the van hit five to six people.

London’s transport authority said London Bridge rail station had been closed at the request of the police.

Police have closed London Bridge while they deal with the incident. Picture: Lipinski/PA via APSource:AP

The attack is the third terror attack in the UK in the past 75 days.

On May 22, a suicide bomber killed 22 people at a pop concert by US singer Ariana Grande in Manchester in northern England.

The Manchester bombing was the deadliest attack in Britain since July 2005, when four British Muslim suicide bombers killed 52 people in co-ordinated attacks on London’s transport network.

People were forced to leave bars with their hands up. Picture: Dan Kitwood/Getty Images.Source:Getty Images

Britain MUST build up military to counter Russian aggression, warns Defence Secretary as he says threat is highest since the Cold War