The sister of a British explorer who has gone missing in a remote jungle in Papua New Guinea while searching for a remote tribe says she is going to “give him hell” for not taking a mobile phone with him.

Benedict Allen, 57, had been due back in the capital, Port Moresby, on Sunday to take a flight to Hong Kong to deliver a talk to the Royal Geographical Society on Tuesday.

But his family are now desperate for news of his whereabouts after he failed to catch the flight and has not updated his Twitter account or his website, leading them to fear the worst.

His sister Katie told The Telegraph she wished she had badgered him to take modern communications equipment on the trip.

There are fears that Mr Allen may have been caught out by recent torrential rain, leading him to become disorientated and lost.

© Provided by The TelegraphA rescue search has now been launched, with the helicopter pilot who dropped him off returning to lead the efforts to find him.

Mr Allen had been trying to reach the Yaifo tribe, one of the past people on the planet to have no contact with the outside world.

The father of three was dropped by helicopter in the jungle at Bisorio, in PNG’s north-west Central Range three weeks ago and has not been heard from since.

Before his departure Mr Allen, 57, boased that –  “just like the good old days” – he would not be taking a mobile or satellite phone with him, writing on Twitter:  “I may be some time (don’t try to rescue me, please – where I’m going in PNG you won’t ever find me you know…)”

Now his sister has spoken of the family’s ordeal waiting to hear whether he has come to harm or simply got lost.

Katie Pestille said: “For everyone else it’s very exciting, all the expeditions and things he does. But for a sister and a wife it’s ghastly. It’s really hard for his wife Lenka. She has three young children and she just wants him back.”

She added: “We don’t think that he has [a mobile phone] and I wish I had insisted that he take one with him, because for a situation like this it would be invaluable. I don’t know whether he wanted the ‘real experience’ or what, but I don’t think he has one.

“We are going to give him hell when he comes back. He won’t be doing that again in a hurry without taking proper communications equipment with him.”

Ms Pestille, 61, an English teacher at a comprehensive school in Bath, said she feared that without help or communication her brother may fall foul of any number of dangers in the isolated jungles of PNG.

“He knows all about that survival stuff, but it worries me is there are bad people in these jungles; loggers, drug dealers, all sorts of bad people,” she said. “His children have not been told he’s lost but I’m sure they keep asking ‘when is daddy coming home?’” 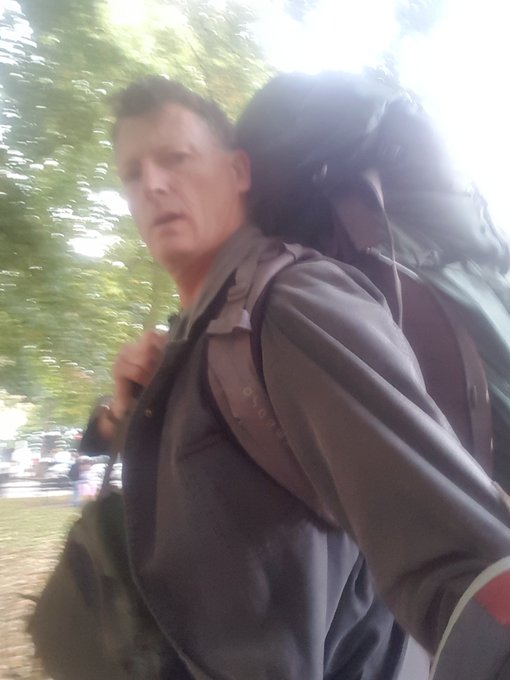 Marching off to Heathrow. I may be some time (don’t try to rescue me, please – where I’m going in PNG you won’t ever find me you know…)

Kirk Huffman, an anthropologist who has worked in Melanesia – the region that comprises PNG, Vanuatu, Fiji and the Solomon Islands – for four decades, said: “I would suspect that Allen may have been delayed by extremely wet weather. In a difficult terrain, that really slows everything down – in an area where it is difficult to move about in even during the dry season.”

Mr Allen – who is the only person to have crossed the length of the 1,000 mile Gobi desert with camels alone and made the first documented journey across the Namib desert – was trying to make contact with the Yaifo tribe he had first encountered 30 years ago.

He wrote: “No outsider has made the journey to visit them since the rather perilous journey I made as a young man three decades ago. This would make them the remotest people in Papua New Guinea, and one of the last people on the entire planet who are out-of-contact with our interconnected world.”

Mr Allen whose father Colin was a test pilot who taught Prince Philip how to fly, said that when he visited the tribe 30 years ago he had been greeted “with a terrifying show of strength, an energetic dance featuring their bows and arrows”.

He said: “On this occasion who knows if the Yaifo will do the same, or run off, or be wearing jeans and T-shirts traded eons ago from the old mission station.

“But of course I may not even made it there – even aged 26 it was a very hard hike up through rather treacherous terrain. Nor do I have an obvious means of returning to the Outside World, which is somewhat worrying, especially at my advanced age.

The explorer, who briefly dated Mick  Jagger’s wife Jerry Hall before meeting Lenka in 2007, lost contact with his family for three months while on an expedition from the mouth of the Orinoco to the mouth of the Amazon 25 years ago.

Earlier this year BBC2 screened a documentary in which Mr Allen took his friend Frank Gardner, the BBC news correspondent, into PNG in search of rare birds of paradise.

© Provided by The TelegraphBy virtue of their isolation and lack of contact with the outside world little is known about the Yaifo people, who are one of the indigenous tribes of Papua New Guinea.

Contact with the Yaifo usually takes place nowadays through missionaries in the area, often US evangelical preachers

It is popularly thought that they once engaged in the practice of headhunting; removing and preserving the heads of captured enemies to keep as trophies in a display of power and domination.

Headhunting has at one time or another been practised among most of the peoples of Melanesia, including New Guinea, indicated by the discovery of  10,000 skulls by a missionary in a community longhouse on Goaribari Island in 1901.

The practice was not motivated primarily by cannibalism, but the head’s fleshy parts were consumed in ceremonies following the capture and killing.

Despite the incursion of missionaries, some tribes in the remotest areas still have very little contact with the outside world.

“There may still be, and probably are, ‘uncontacted’ groups in parts of the island of New Guinea,” said anthropologist Kirk Huffman.

On his first visit to the country when he was 24 Mr Allen underwent a ‘crocodile initiation ceremony’, which involved being held in a small enclosure for six weeks and being ceremoniously beaten, leaving him scarred for life with ‘crocodile skin’ markings.