here was no rotation or controversy to blame at Anfield on this occasion but it was another episode of torment for Liverpool as they were held to a second successive home draw. West Bromwich Albion recorded an unwanted club record of 16 games without a win, although Alan Pardew will not complain about a point at Anfield.

For Liverpool the first half was a case of different faces from the Merseyside derby but familiar frustrations. Their “rotated four” – Philippe Coutinho, Roberto Firmino, Emre Can and Georginio Wijnaldum – were back in the starting line-up after being benched against Everton.

The only surprise in Klopp’s latest selection was that they joined Mohamed Salah, who was substituted as a precaution against a hamstring problem on Sunday. Simon Mignolet was replaced by Loris Karius in goal having suffered a slight injury in the last outing.

Klopp again deployed the 4-2-2-2 formation that dismantled Spartak Moscow here a week earlier although, with nine Albion players encamped deep in their own half, it frequently morphed into a four-man attack with Sadio Mané and Coutinho pressing high up the flanks.

Fluency was not confined to Liverpool’s system. The visitors would shift to a six-man defence at times with the wide men James McClean and Hal Robson-Kanu dropping either side of their full-backs. It was not simply a numerical advantage that helped stifle Liverpool until the interval, however. Albion’s defence was marshalled superbly by Jonny Evans, immaculate alongside fellow centre-half Ahmed Hegazi, and the sight of Klopp imploring Firmino and Salah to switch places more often gave an indication of the home side’s difficulties breaking them down. 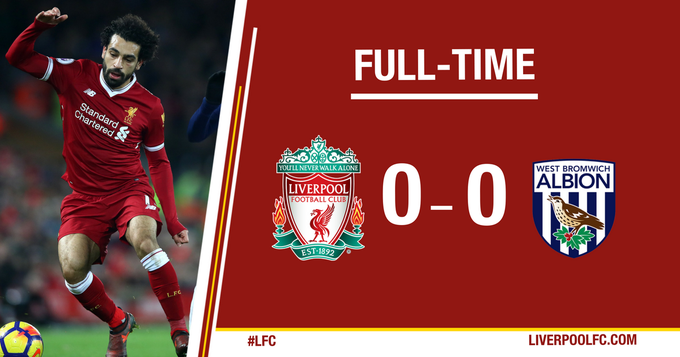 It finishes goalless here at Anfield.

Salah did pierce Pardew’s back-line with an exquisite diagonal ball across the Albion penalty area towards his Brazilian strike partner. Allan Nyom’s failure to intercept offered Firmino a clear sight of goal but his first-time shot sailed beyond both Ben Foster and the far post. That was as close as Liverpool came to breaking the deadlock before half-time. Salah was a foot away from connecting with an inviting cross from Trent Alexander-Arnold that sailed behind Hegazi, his international team-mate, and Coutinho shot straight at Foster from distance.

Otherwise Liverpool’s attacking play lacked its usual urgency and rhythm with Mané struggling to get involved. Unlike against Sam Allardyce’s team it was not all one-way traffic either. Albion attacks were rare but resulted in Claudio Yacob sending a free header over from Nyom’s right wing cross and Robson-Kanu striking the top of Karius’s crossbar with a curling effort from 25 yards.

The number of corners conceded to the visitors also presented a problem for Liverpool, particularly given Grzegorz Krychowiak’s quality with a dead ball. The Poland international, on loan from Paris Saint-Germain, forced Karius to tip over his bar early in the second half with a deep free-kick that had the Liverpool keeper back-peddling. From Krychowiak’s resulting corner Yacob steered a glancing header goalwards but the German saved well. The Albion midfielder tried a different routine with the corner that followed, playing it short to Robson-Kanu before crossing to Hegazi who headed over from close range. Pardew’s anguished reaction suggested he should have at least found the target.

Thereafter it was back to absorbing Liverpool pressure for Albion. Klopp’s team built up ominous momentum around the hour mark yet the all-important breakthrough continued to elude them. Mané side-footed wide when found unmarked inside the area by Firmino’s pull-back. Salah, his touch falling below this season’s outstanding standards all night, headed wide from six yards out when Alexander-Arnold’s cross deflected off Krychowiak. On one of the few occasions concentration lapsed in the visiting defence, Foster flapping twice at a Mané delivery, Evans was on hand to beat Wijnaldum to the loose ball.

There was also a question of luck accounting for the scoreline, or the lack of it for Liverpool. Klopp introduced Dominic Solanke , Alex Oxlade-Chamberlain and Joe Gomez in the search for a breakthrough and it was so close to paying dividends. Solanke converted a late Gomez cross that deflected off Hegazi, but it struck both his chest and arm before finding the net and was disallowed.

Seconds later, after Foster saved at the feet of Oxlade-Chamberlain, Solanke struck the rebound goalwards but Hegazi was on the line to clear.

Klopp Talk: There Will Be Fire

Cristiano Ronaldo should play on for Portugal, coach urges after exit