On January 31, photos appeared on Twitter that suggest China is currently testing a ship-mounted hypersonic railgun. Also known as an electromagnetic railgun, the superweapon has been pursued by various nations—including the United States—but never known to be fully tested and deployed.

In the way that cannons use gunpowder to launch a projectile, railguns use electromagnetic energy, essentially giving them the speed of a cannon with the range of a missile, according to Popular Science. The “rail” part refers to the weapon utilizing two rails with a powerful electromagnetic field generated in between. The gun’s armature, meaning an electricity-conducting device made out of metal, shoots the projectile out through the field between the two rails, according to Popular Mechanics.

The nature of the photos hasn’t been officially confirmed as of press time, but they appear to show the Chinese naval ship Haiyangshan docked in Wuhan, the capital of the Hubei province. China has been quietly moving its railgun technology forward for some time now, according to a separate report by Popular Science. Such a weapon would have the potential to shoot aircraft and missiles out of the sky, so the prospect of another country beating us to the punch has captured a lot of attention since the images began to circulate.

“There isn’t really a known defense mechanism against a railgun shot at high Mach numbers,” Justin Bronk, a combat technology researcher at the Royal United Services Institute in the United Kingdom, told New Scientist. “It’s too fast and too small for current anti-ship missile and anti-aircraft defense systems…If they can get it integrated as a major component into their future fleet arsenal, it will give them a really significant edge over the U.S. navy.” 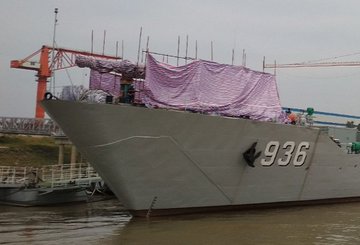 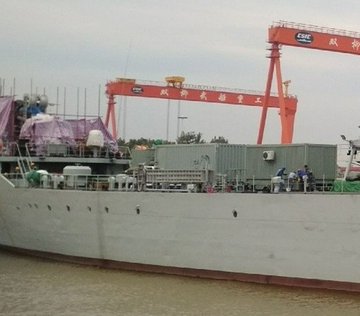 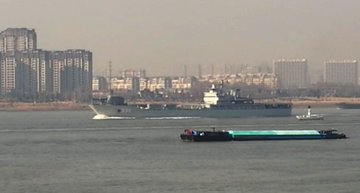 Is the #Chinese #Navy about to test a #railgun at sea? New views of 22-yo Type 072 III landing ship HAIYANGSHAN 936 with what might be a railgun forward. Power modules seem to be placed on deck just aft of the gun. Props to @xinfengcao et al for these.

The United States Navy has been developing its own railgun technology for almost a decade now, according to New Scientist. While the U.S. system would be land-based, as opposed to mounted on a Navy landing craft as the Chinese railgun appears to be, it’s a formidable weapon nonetheless.

The U.S. Navy’s railgun can fire a projectile at a speed of more than 4,500 miles per hour, which corresponds roughly to Mach 6. Its goal is to exceed a projectile range of 100 miles, which would mean that, power-wise, each shot would expend the same amount of energy needed to power about 19,000 homes, according to Popular Mechanics.

While the Navy has a working prototype, plans to install such a prototype on a U.S. naval ship in 2016 were ultimately put on hold due to lack of funding, and we’ve remained more or less stalled since then, according to Popular Science. The U.S. government had poured $500 billion into the project.
Newsweek.com
Facebook Comments