BERLIN—A German court rang the death knell for certain diesel cars on Tuesday, striking a blow to the country’s flagship auto industry that could now be forced to spend billions to upgrade or replace millions of cars.

Rejecting an appeal of a lower court decision, the Federal Administrative Court in Leipzig ruled that German cities Stuttgart and Düsseldorf, which appealed local court rulings, could ban diesel vehicles from urban traffic as a way to reduce pollution. Ultimately, the ruling clears the way for other cities to issue bans, which could result in the hometowns of German auto icons Mercedes-Benz, BMW AG, and Audi banning some of those manufacturers’ flagship products. 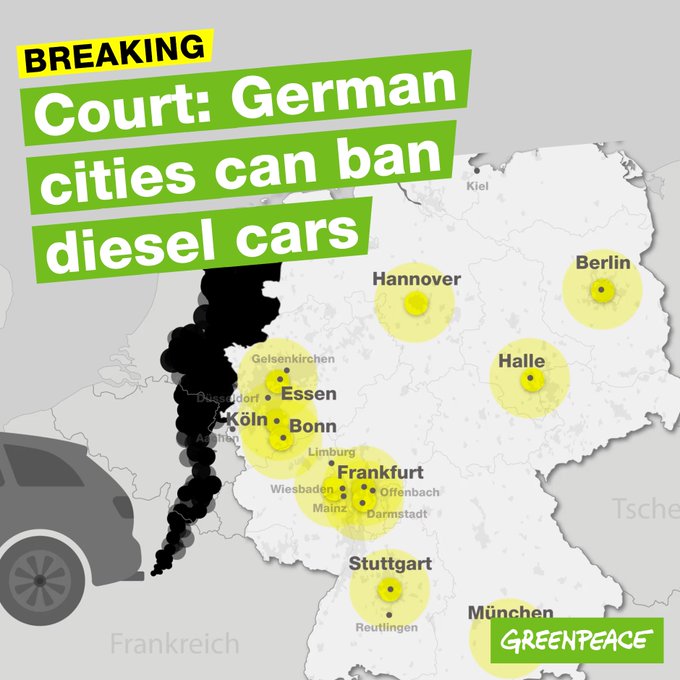 The closely watched ruling is likely to accelerate the demise of a technology that German auto makers have pushed as a panacea that provides solid driving performance, fuel economy and low greenhouse gas emissions, but which has been largely been discredited in the wake of widespread emissions-cheating scandals at Volkswagen AG and other car makers.

The next German government also will face a tough decision in the wake of the ruling. The government may have to force car makers to shoulder an estimated €8 billion in costs to refit diesel vehicles, weakening the country’s flagship industry at a time when it must invest heavily in electric vehicles and self-driving car technology—potentially endangering a crucial segment of the German economy. Or the government may make the unpopular decision to use taxpayer money to finance the repairs, potentially alienating voters.

The fumes from diesel fuel, which enjoys tax subsidies across Europe, have also been revealed to be more damaging to health than thought years ago.

The Leipzig ruling in support of diesel bans “will accelerate that decline,” said Liam Butterworth, chief executive of auto supplier Delphi Technologies LLC, in an interview, adding that auto makers will likely move faster to replace diesel engines with gasoline engines, electric cars and hybrids. “The majority of diesel engines below 2-liters will just go away,” he said.

In 2016, a state court in Düsseldorf backed a lawsuit by the non-profit Environmental Action Germany (DUH) and explicitly ruled that driving bans are allowed to reduce nitrogen oxide, or NOx, pollution, a byproduct of diesel emissions. A court in Stuttgart, where Mercedes and Porsche are based, followed suit last July.

The respective state governments where the cities are located, North Rhine Westphalia and Baden-Wurttemberg, appealed the ruling, putting the issue in hands of federal judges in Leipzig. By setting a federal precedent, the Leipzig court leaves cities with little recourse but to ban diesel vehicles.

“We expect that the first diesel bans will be implemented within the next three to six months as a result of this ruling,” said Jürgen Resch, director of Environmental Action Germany, the non-profit group that launched the Stuttgart lawsuit.

A widespread ban on diesel wouldn’t only hurt commuters, but could also hit local businesses, buses, taxis and other municipal services that rely on diesel vehicles. With millions of car owners affected, the auto industry is under enormous pressure to foot the bill to get the dirty diesel vehicles off the road.

Car dealers are already finding it more difficult to sell the cars. Diesel vehicles remain an average 102 days on the lot in Germany, and resale values for diesel cars have fallen 6% over the past year in Germany, largely on fears of diesel bans. Lower resale values could hit leases that assume higher residual values and could force car makers to provide financial support for their dealers.

One government proposal would require car makers to upgrade the actual hardware on the engines of older diesel to improve their emissions. If enacted, the move could cost German auto companies nearly €8 billion to repair the vehicles, according to analysts at Evercore ISI, a London-based brokerage.

FTSE 100 edges up but politics weigh on cautious traders