Jeremy Corbyn has questioned why samples of a deadly nerve agent have not been sent to Moscow for analysis amid escalating tensions with Russia over the poisoning of an ex-spy and his daughter.

The Labour leader described the use of a military-grade nerve agent on Sergei and Yulia Skripal as an “appalling act of violence” but drew jeers from MPs for pressing the Prime Minister on what evidence the Government had for blaming the Kremlin for the incident in Salisbury.

Speaking after Theresa May announced the biggest expulsion of Russian spies in 30 years, Mr Corbyn said the UK response must be “decisive and proportionate and based on clear evidence”.

He also tore into Government cuts to the diplomatic service, which he singled out as a reason for undermining the UK’s influence abroad.

Mr Corbyn said: “If the government believes it is still a possibility that Russia negligently lost control of a military-grade nerve agent, what action is being taken through the OPCW (Organisation for the Prohibition of Chemical Weapons) with our allies?”

To cries from all sides, he urged a “robust dialogue” with Russia, demanding: “How has she responded to the Russian Government’s request for a sample of the agent used in Salisbury attack to run its own tests?

“Has high-resolution trace analysis been run on a sample of the nerve agent and has that revealed any evidence as to the location of its production or the identity of its perpetrators? 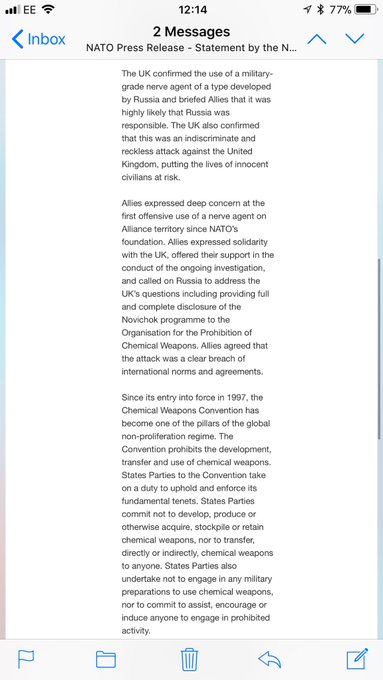 “And can the Prime Minister update the House on what conversations, if any, she has had with the Russian Government?”

The Labour Leader took aim at Government cuts to the diplomatic service, which he said had been hollowed out in recent years.

He said: “It is as we on these benches have expressed before, a matter of huge regret that our country’s diplomatic capacity has been stripped back with cuts of 25 per cent in the last five years.

“It is moments such as these that Governments realise how vital strong diplomacy and political pressure are for our security and national interest.”

Aiming criticism at Boris Johnson, who was visibly angered by Mr Corbyn’s comment, he said: “I couldn’t understand a word of what the Foreign Secretary just said, Mr Speaker, but his behaviour demeans his office.”

Ms May hit back, saying it is “not a question of our diplomacy… this is the question of the culpability of the Russian state for an act on our soil.”

The Labour leader also took a swipe at the state’s relationship with “corrupt oligarchs” and expose the flows of “ill-gotten cash” into London, through Russian billionaires who are sheltering their wealth abroad.

His comments came after Ms May delivered a hard-hitting statement in response to the incident in Salisbury, where she announced the biggest expulsion of Russian spies in 30 years.

© PA Barriers erected outside a Zizzi restaurant in Salisbury

Some 23 diplomats had been identified as “undeclared intelligence officers” and had been given one week to leave the UK, Ms May said.

She also announced plans for a freeze on Russian assets, tougher powers to detain suspicious people at borders, and suspension of high-level diplomatic relations – including a ban on Royals and ministers attending this year’s World Cup in Russia.

Covid-19: Pfizer/BioNTech vaccine judged safe for use in UK