The hero police officer who was left in critical condition after a Russian spy and daughter were poisoned has been discharged from hospital.

In a statement read by Wiltshire Police Chief Constable Kier Pritchard, DS Bailey said he had been “overwhelmed” by the support he has received during what has been a “surreal” experience.

The statement read: “People ask me how I am feeling – but there are really no words to explain how I feel right now. Surreal is the word that keeps cropping up – and it really has been completely surreal.

“I have been so very overwhelmed by the support, cards and messages I have received – everyone has been so incredible.

“Some days we’ve had about 300 messages from officers, the wider police family and the public. The level of support has been unbelievable and I’ve tried to respond to what I can, but I want to say I have really appreciated every single message. 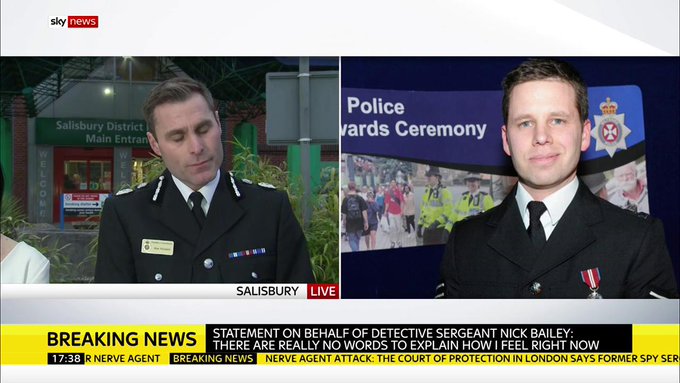 “One thing that has lifted me throughout the last few weeks has been the public support the police service has received during this incident.

All the stories of community spirit – from the local businesses providing food and hot drinks to the officers standing for endless hours on the cordons, to the members of the public just showing their support for our work – have been quite simply overwhelming to hear about.

“I want to pay tribute and give my absolute and heartfelt thanks to the staff of Salisbury District Hospital. The care I have received from the medical staff has been simply outstanding from day one – from the man that cleans the floor to the doctors giving the treatment – they have all been absolutely phenomenal. Thank you just doesn’t seem enough and just doesn’t convey the gratitude I feel for what they have done for me.

“I have spent all my time since the incident really focusing on trying to get better and trying not to think about anything else. But as I have begun to feel better, I have become aware of the widespread and enormous attention this whole incident has attracted. I find this really overwhelming – I am just a normal person with a normal life, and I don’t want my wife, children, family or I to be part of that attention. I do hope the public can understand that.

“I want people to focus on the investigation – not the police officer who was unfortunate enough to be caught up in it. I understand why there is attention on me, but all I have done is represent every police officer who goes out there every day and puts their life at risk.

“As for what happens now – we are just taking each day as it comes at the moment.

“I recognise that ‘normal’ life for me will probably never be the same – and Sarah and I now need to focus on finding a new normal for us and for our children.”

“What I need now is time to re-group, recover and most importantly spend time with my loved ones. I do understand and appreciate the attention on this incident, but I would ask people to put themselves in my shoes. I want to respectfully ask the media for privacy for me and my family at this time and for no intrusion into my private life, so that my family and I can try to come to terms with what has happened.

© Getty Police Continue To Investigate Poisoning Of Sergei Skripal In Salisbury“Thank you so much for all of your support.”

His wife Sarah added: “This has quite simply been the most traumatic event of our life and it feels like our world has been turned upside down in a really short space of time.

“I am so grateful for the support from our immediate family and friends and the police family liaison officers through this last few weeks – I really don’t know how I would have coped without them.

“I never really realised what the term ‘police family’ was all about until this incident – but now I really do. All the messages we have received from the police family have been so heart-warming and have meant so very much to me, I can’t put it into words.

“Nick doesn’t like the term hero, but he has always been a hero to me and our children.”

After slaying of ‘father of Taliban’ in Pakistan, mourners underscore complex legacy