A huge fire has broken out at a luxury hotel in central London a week after the completion of “the most extensive restoration in its 115-year history”.

Plumes of smoke could be seen rising from the five-star Mandarin Oriental in Knightsbridge after firefighters were called just before 16:00.

About 120 firefighters and 20 engines have been sent to the scene in William Street, London Fire Brigade said.

The cause of the fire is not yet known, a spokesperson confirmed.

Both the ambulance service and the Met Police are also attending the scene, although there are no reports of any injuries, the fire brigade said.

After the blaze broke out, staff were evacuated from the 12-storey building to Hyde Park, where they given bottles of water.

One, who asked not to be named, said: “The fire alarm started and everybody was told to get outside.

“Everything’s fine but we don’t know how it started yet.” 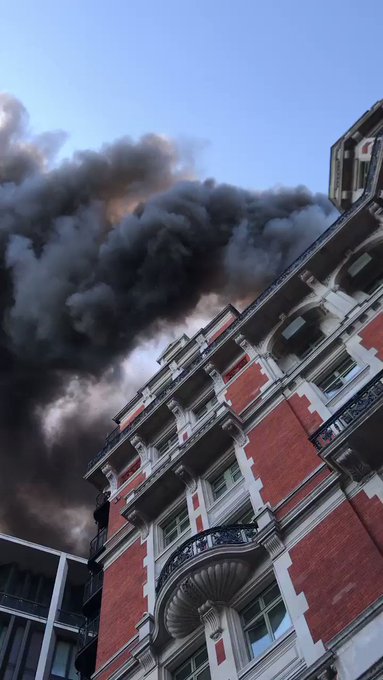 Just evacuated Mandarin Oriental hotel to see this…. absolutely crazy! So impressed by the organisation in bringing everyone to safety #knightsbridge #mandarinoriental

Dozens of witnesses were in Knightsbridge, home to the Harrods department store, when the fire started.

Penelope Evans, 50, from Battersea, south London, was shopping in Harrods when she noticed the thick smoke as she was leaving.

“I saw all this black smoke coming from the sky, it was covering everything and the smell was horrendous,” she said.

“It was like people were in shock, everyone immediately just started leaving the street and the area.

“There were hundreds of fire engines, ambulances, police racing by and helicopters overhead.

“After Grenfell, I feel like people are a lot more on edge about these things, people just wanted to get out.”

Tourist Eric Bantug, who was visiting from Las Vegas, spoke of his shock at seeing a historic building in flames.

The 47-year-old financial services worker, said: “I was just coming up from the Tube and smelled the fire. I could smell burning.

“When I got up above ground I saw all the smoke coming out of the building.

“It’s pretty old and it’s a shame to see it happen.”

Bosses of the international hotel chain recently announced the end of renovation work “designed to confirm this historic hotel’s position as one of the best in the world”.

A spokesman said: “We are aware that there is a fire at Mandarin Oriental Hyde Park, London, and that the fire brigade is at the hotel.

“As the situation is still unfolding, we have no further details to share at this time, but will provide an update soon.”

Knightsbridge has been closed between Sloane Street and Grosvenor Place and a number of nearby buildings, including high-end department store Harvey Nichols, were also evacuated.

Patients and staff were evacuated from W One cosmetic clinic next door to the hotel, according to Dr Terry Loong who said she and her team were ordered to leave the premises at about 16:00 by the London Fire Brigade.

Transport for London said the blaze was also affecting entry to and exit from Knightsbridge station.

It tweeted: “Knightsbridge: currently the Sloane Street entrance at the station is closed.

“Customers are advised to use the Harrods entrance.”

Princess Anne had been scheduled to attend a 50th Anniversary Dinner of the Blues and Royals Club at the hotel later.

The Mandarin Oriental has previously been used by the Royal Family, including an event for British and foreign royals hosted by the Queen on the eve of Prince William’s wedding in 2011.

Britain has the HIGHEST rate of excess deaths in Europe as figures show up to 55,000 more people have died in the UK this year than expected