I’ve looked forward to this launch more than any other this year. First revealed at Goodwood Festival of Speed, the McLaren 600LT is a track-focused take on the McLaren 570S. It has more power, less weight and, as a new McLaren Longtail, sizeable shoes to fill.

I’m feeling a tad trepidatious, too. My drive takes place at the Hungaroring, a pukka Formula One circuit with fast straights and tight turns. If anywhere can showcase this 600hp supercar’s talents – and expose its flaws – it’s here.

Priced at £185,500, the McLaren squares up to some of the finest driver’s cars on sale, including the Lamborghini Huracan Performante, Mercedes-AMG GT R and Porsche 911 GT3 RS. Will this hardcore hero live up to the hype? Here’s everything you need to know.

The Longtail (LT) name has an illustrious history, starting with the greatest supercar of them all. The original Longtail was a McLaren F1, specifically a development of the Le Mans-winning F1 GTR. Its elongated carbon fibre bodywork was designed to improve aerodynamics and increase downforce, giving the car its trademark stretched silhouette.

A first roadgoing LT followed in 2015. The 675LT was a harder, faster 650S, its extended rear end incorporating a huge pop-up airbrake. Demand – stoked by critical acclaim – far outweighed supply, with just 500 Coupés and 500 Spiders made.

The 600LT is the first entry-level ‘Sports Series’ McLaren to get the LT treatment and, this time, that titular tail gains a pair of Porsche 918-style top exit exhausts. Again, production will be “strictly limited” (although McLaren won’t commit to a number) and a drop-top Spider is planned, due in 2019.

Fully 23 percent of components on the 600LT are different to the 570S, with the changes entirely focused on boosting performance.

The 600LT also stops quicker, thanks to carbon-ceramic discs from the ‘Super Series’ 720S and a McLaren Senna-inspired brake booster. From 124mph (200kph), it slows to a standstill in 117 metres – just one metre more than the P1 hypercar of 2013. That’s the pace of progress.

Track driving is part of its DNA

This quest for circuit-based speed starts with more aggressive aero. A jutting front splitter, larger side skirts, fixed rear wing and racing-style diffuser all contribute to 100kg of downforce at 155mph: a speed, incidentally, that I’ll soon surpass at the Hungaroring.

The final piece in the dynamic puzzle is tyres. The Pirelli P Zero Trofeo Rs fitted here are bespoke to the 600LT and have a soft, sticky compound for maximum cornering grip. Conventional P Zeros, longer lasting and better for wet weather, are a no-cost option.

Even for a supercar, it looks special

Forget the joy of specs for a moment: the 600LT looks sensational. From upwards-opening dihedral doors to an exuberant paint palette, its styling screams ‘supercar’. An Audi R8 seems plain by comparison.

As you’d expect, McLaren’s modifications encompass more than simply a 45mm-longer tail. For me, the hands-down highlight are those exhausts, relocated from within the bumper to the rear deck. A heat-resistant coating protects the central section of the wing from occasional flame-outs: one result of such stubby tailpipes. 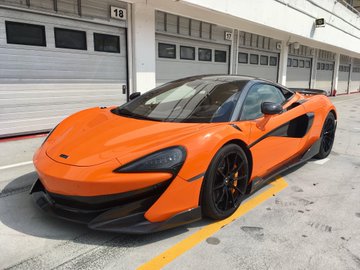 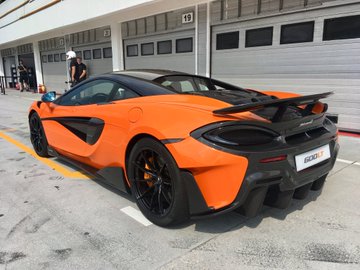 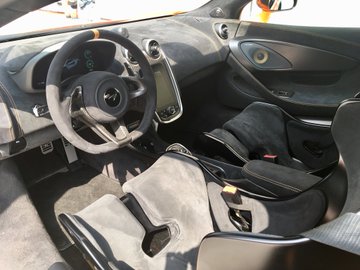 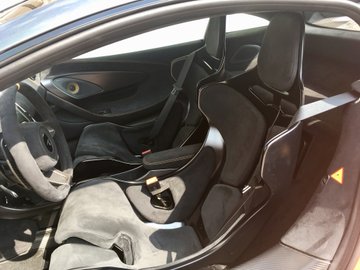 McLaren 600LT at the Hungaroring.

Note the super-lightweight ‘Senna seats’ in this car, which save 24.6kg.

Sadly, my favourite upgrade wasn’t fitted to our test cars. For a mere £25,000, McLaren Special Operations (MSO) will install a fully-functional roof scoop, as seen on the Pebble Beach 600LT show car – and indeed the F1 GTR Longtail.

You can sit in Senna seats

Inside, the transformation from 570S to 600LT is less obvious, but that’s no bad thing. A low scuttle gives excellent forward visibility and swathes of Alcantara on the seats, doors and dashboard instil a race car vibe. McLaren’s rather rudimentary media system is the only bum note.

In fact, audio and navigation aren’t standard on the 600LT (saving 3.3kg in weight), and nor is air conditioning (a further 12.6kg). All are no-cost options, however, and I’d certainly sacrifice a few kilos for chilled air and 6Music. I suspect the majority of customers will, too.

If you want the lightest possible spec – and coolest-looking cabin – you’ll need the seats from the Senna. These are essentially a carbon fibre shell with seven strategically-placed pads, and weigh just 3.35kg each. They’re more comfortable than they look…

McLaren has finally sorted the soundtrack

I’m loitering in the pitlane, awaiting my first of three track sessions. Cars are lined up, idling and awaiting a green light, and it’s immediately apparent how much louder the 600LT is.

This is the other benefit of those truncated tailpipes: more decibels, more drama. The sound is recognisably a V8, but this is no thudding, AMG-style rumble. It’s harder, harsher and bristling with urgent intent.

At speed on the circuit, the noise swells from savage snarl to bellicose bellow as the needle nears 8,500rpm. The whip-crack on downshifts is a delightfully naughty, too. Even wearing a helmet with plugged-in intercom scarcely muffles the fireworks.

An extra 30hp feels like a token gesture in a car that started life with 570hp. However, factor in that 100kg weight loss and it’s no surprise the 600LT posts significant gains against the stopwatch. It’s subjectively quicker, too.

Driving back-to-back with its standard sibling, there’s an added physicality, a renewed brutality to how it blasts out of bends. It feels like a racing car: tightly wound and totally lacking in inertia.

The most noticable difference is under braking. Hitting 160mph at the end of the start/finish straight, then slamming on the stoppers for a second-gear bend, I feel the 570S dive a little, its rear end squirming ever-so-slightly sideways. The 600LT, however, is rock solid, staying flat and stable from even higher speeds.

It corners quicker than a 675LT, too

Perhaps the old 675LT’s biggest claim to fame was being the fastest car around the Top Gear test track – a title it still holds today. Piloted by the Stig, its 1min 13.7sec lap bested a Pagani Huayra and single-seat BAC Mono. Yet the 600LT matches it to 62mph and, according to McLaren, can “generate circuit cornering speeds that exceed those of a 675LT”. Startling stuff.

What’s equally remarkable is how easy the 600LT’s talents are to exploit, even for a driver of my decidedly average ability. Around the Hungaroring’s final, constant-radius corner, I found I could trim the car’s line with the throttle, its chassis lucidly telegraphing the fine line between grip and slip.

Clearly, its limits are high – especially on Trofeo R rubber – but find them and the 600LT breaks away progressively and safely. Despite its track focus, it’s both agile and docile: a trademark McLaren trait.

It’s a scalpel, not a sledgehammer

The laws of physics dictate that any car with 600 horses and rear-wheel drive can be very slideable indeed. If ‘slideable’ is even a word. But unlike, say, an AMG GT R or Aston Vantage, going sideways isn’t the McLaren’s métier.

For starters, there’s no Variable Drift Control – the system fitted to the 720S that allows increasingly lurid, driver-selectable angles of attack. Instead, it sticks with three modes: Normal, Sport and Track. The latter allows more movement before gently intervening, allowing fun that doesn’t end in a gravel trap (or worse).

And fun is what you’ll have, albeit of a more measured variety than gratuitous, tyre-smoking hoonery. The 600LT is tenacious, malleable and fantastically fast. Oh, and if you really must, there is a ‘burnout mode’ for standing starts, which I’m ashamed to say I didn’t sample.

The sticker price is only the starting point

By far the most expensive of these was the MSO Clubsport Pack, at £24,200. It includes the aforementioned Senna seats, plus titanium wheel bolts and liberal splashings of exterior and interior carbon fibre – including for the roof, rear buttresses, gearshift paddles and steering wheel spokes. Total weight saved is 9.3kg, at a cost of (ahem) £2,602 per kg.

Add a further £21,630 of ‘visual’ carbon upgrades (mirror casings, door inserts, bumper aero fins), and it’s clear the black stuff doesn’t come cheap. The one essential option fitted was the £3,860 Security Pack, which includes a hydraulic nose-lift system. Without it, you’ll be grounded at first sight of a speed hump.

I was right to be excited: the 600LT is another ballistically brilliant McLaren Longtail. It’s a machine that, despite its ‘junior’ supercar status (and such things are relative), is fit to follow in the tyre tracks of the 675LT and F1 GTR.

The best driver’s car launched in 2018, then? Well, the obvious caveat is that, so far, I’ve only tried the 600LT on-track. However, the way it handled the Hungaroring’s choppy serrated kerbs suggests it won’t shake you senseless over British bitumen.

For me, the obvious stumbling block here is the Porsche 911 GT3 RS, with its equally talented chassis and fearsome, 9,000rpm flat-six. But since you can’t actually buy a ‘991.2’ RS unless you’re one of the favoured few – or prepared to pay vastly over the odds – the McLaren claims victory by default. Well played, Woking.