The highest level of water since December 2008 inundated 75% of Venice on Monday. The regularly occurring acqua alta, or high tides, reached exceptional heights of 156cm, and city officials are saying it is the worst flood to hit Venice in a decade. 90cm of water entered St Mark’s Basilica, damaging the city’s most important church and ageing the building by 20 years, according to the church’s administrator. It is the fifth time in the Basilica’s 1000 year history that water has got inside, as repair work becomes increasingly difficult. Water engulfed the baptistery and Zen chapel where the statue of Madonna with the Gold Shoe stands. The water retreated after 16 hours. Local schools were closed and citizens were warned not to leave their homes. 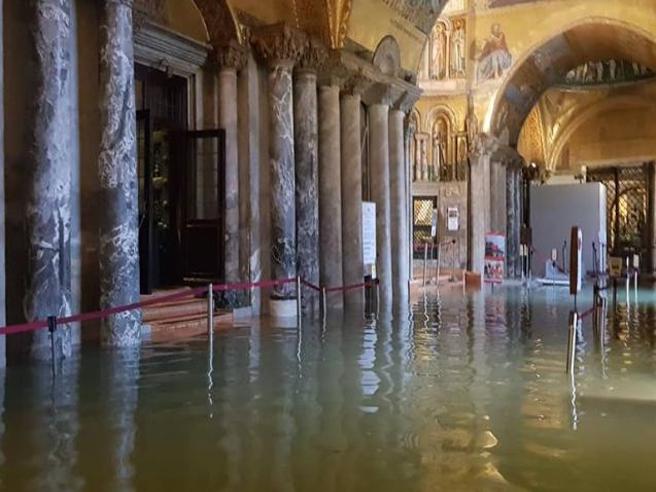 Photos on social media showed the extent of the flooding inside St Mark’s.  “Venice, the Basilica of San Marco flooded: In 24 hours aged 20 years.”

The Civil Protection Agency are working with regional authorities to prevent further damage by the storms and flooding. On the third day of the extreme weather that has hit Italy, seven families were evacuated from their homes by the fire brigade in the towns of Noventa del Piave and Santa Maria di Piave to the north of Venice.  The area is at high risk of flash flooding from the Piave river which was flowing at maximum height on Tuesday afternoon. Power was interrupted and the water supply was cut off in the Belluno area to the north, as a result of damaged aqueducts.

Six people were reported dead on Monday with further casualties on Tuesday. In the Veneto region, a man died after being hit by a tree and the body of a 61 year old man was recovered from a river close to Belluno, after his car was found earlier. A volunteer fireman died in the region of Alto Adige to the north east, also known as South Tyrol, and a fisherman’s body was found in a lake. A landslide destroyed homes, killing one woman.

Floods in Venice are common, but these are exceptional

Venice, the historic city of bridges and masks, often floods between October and January; the result of high tides and the strong sirocco wind blowing from the south west which pushes water from the lagoon into the city.

Water levels of 100-120 cm are fairly normal for the city and rafts of pontoon bridges are put in place to cope with the raised waterline. High water depends on the tide cycle and acqua alta on the streets lasts only a few hours during the peak of the high tide (usually 3 to 4 hours). Once water goes down again, things go back to normality.

At the peak of the high tide on Monday, the flood water level had returned to normal levels of 110 – 120 cm in Venice.

The high waters usually only affect the lowest parts of the city, such as St Mark’s square which floods rapidly when water bursts through the drains.

Valeria Duflot and Sebastian Fagarazzi, founders of sustainable travel company Venezia Autentica highlight that the flooding is not persistent, nor is it unexpected and has a minimal effect on tourists.

“The flooding does not have a major impact on the visitors’ experience who actually tend to enjoy this unique phenomenon. The main inconvenience is that in the case of exceptionally high acqua alta, moving around can be made more difficult, as boats can no longer pass under the bridges, and normal city life is slowed down for a couple of hours.”

The recent flooding is the first to affect Venice this autumn and wind speeds of 45 mph were reported at Marco Polo airport.

Altered flood patterns in the past decade

Valeria Duflot and Sebastian Fagarazzi said that episodes of high tides have become more frequent and intense over recent years, due to structural amendments and global warming.

“We have been surprised to see two exceptionally high tides happening during the summer, out of season, in the past few years. This is thought to be linked to human intervention and especially the structural changes made to the lagoon. More acqua alta are expected because of the rise in sea levels.”

Used to coping with the flooding, local businesses and restaurants normally board up their properties to prevent the water from entering. However this time, photos show water being pumped out of shop interiors, in an attempt to mitigate the flood damage.

“Acqua alta is well-known locally. Residents are alerted via messages, e-mails, and sirens well in advance of an upcoming high tide. Based on this information, everyone knows whether or not the water will flood their home or place of business and how high it might be,” said Valeria Duflot and Sebastian Fagarazzi.

Residents and tourists used wooden bridges to navigate the flood waters and the vaporetto, Venice’s water-bus system was cancelled on the Grand Canal on Monday as a result of the deluge.

AccuWeather stated that the flooding was enhanced by a dramatic difference in air pressure between Venice and the neighbouring Adriatic Sea, which lifted water levels and exacerbated the effects of the strong winds on the lagoon.

Writing on social media about the region’s severe weather, the Veneto Governor Luca Zaia said that the Adige, Italy’s second longest river, is forecast to flow at a rate of 1900 cubic metres per second, close to record highs for the river.

He advised citizens to prioritise their safety by taking care to avoid overflowing areas. Zaia also warned that inundations could get as bad as the 1966 flooding which devastated Venice and Florence with water levels of 6.7 metres.

Venice’s lack of flooding precautions was blamed by the city’s mayor Luigi Brugnaro, who said that underwater barriers erected in the lagoon could have prevented such mass flooding. The Mose project, known as Moses, planned for the installation of mobile gates which would be inserted into concrete foundations on the lagoon bed to temporarily shut off the Venetian lagoon from the Adriatic Sea.

Similar to the London Thames Barrier, these gates would raise when water raises by 109cm – on average, this happens four times annually in Venice – and safeguard the city for a century. Construction began in 2003 and the concrete foundations have already been constructed and lowered into the water.

However, the long overdue €5.4 billion project remains unfinished, having been stalled by high costs and corruption.

Extreme weather hits Italy for the third day in a row

Meanwhile, the rest of Italy has been battered by heavy storms. Amid heavy rains, flooding and gale force winds, pine trees were blown over killing four people around Naples and Rome and leaving rivers dangerously full. As a precaution, major tourist attractions in Rome have been closed, including the Colosseum and Roman Forum.

In Liguria, luxury yachts were toppled by storm winds in the resort town of Rapallo, whose breakwater walls were destroyed by pounding waves. Fire brigades rescued 19 people trapped in Rapallo while a landslide isolated the town of Portofino and damaged roads. Dangerous tides off the east coast smashed a man kitesurfing against the rocks near the town of Rimini.

Is it safe to travel?

A high level red alert has been issued by Italy’s Civil Protection Agency for the north eastern and exposed western coastal regions. The high water alert applies to Liguria, Lombardia, Veneto – the region surrounding Venice, Friuli Venezia Giulia around Trieste and Trentino Alto Adige to the north. There is a lower orange alert in Lazio, the western part of Liguria, wide areas of Lombardia, areas of Piemonte, Tuscany, Emilia Romagna, Campania and western Abruzzo.

The Foreign Commonwealth Office advises that bad weather is expected to continue throughout the week in much of Italy, as well as high seas along the coastal areas. In light of the severe weather conditions, follow the advice of local authorities.

10 things you can’t do in Dubai

American Airlines cancels dozens of flights to London throughout December

Christmas travel: Are trains running and how do you get cheap tickets?