When the helicopter carrying Kobe Bryant, his daughter Gianna and eight others came down on a hillside and burst into flames in the upmarket California neighbourhood of Calabasas, a true sporting icon was lost.

Kobe was one of few athletes worldwide known simply by his first name.

© Getty Kobe Bryant was a global superstarHe was a five-time NBA champion, an 18-time NBA all-star, and widely considered among the greatest basketball players in history.

He was also a genuine crossover star, known far beyond his own sport and whose influence extended outside his home country – even to places where basketball isn’t played regularly.

That was evidenced by those who paid tribute as news of his death spread; figures as diverse as former US President Barack Obama, sprinter Usain Bolt and ex-footballer Gary Lineker tweeted their condolences.

Bryant had retired in 2016 but many of those who currently play were inspired by him. Only on Saturday night, he was surpassed on the NBA all-time scoring list by LeBron James, another great of the game.

James spoke immediately after that game of Bryant’s worth ethic, which was famously formidable – he was known as being the first to turn up for practice and the last to leave, his marathon shooting sessions the stuff of legend.

Courtside seats at the Staples Center to watch the Lakers play are among the most exclusive tickets in sport.

Celebrities gather there to see and be seen and the more famous you are, generally the closer to the action you get.

© Getty David Beckham and Gordon Ramsay meet Bryant at a Lakers game in 2010That was never more the case than for Bryant’s final game in April 2016 when he put in a trademark performance with 60 points on 50 shots to secure victory for the Lakers over Utah Jazz.

Jack Nicholson, Jay Z and David Beckham were there as Magic Johnson – another basketball great – proclaimed Bryant to be the greatest ever to wear the purple and gold of the Lakers.

In retirement, Bryant turned his attention to business and entertainment, winning an Oscar in 2018 for his animated short film Dear Basketball, a love letter to his sport.

When he collected the Academy Award, he said: “As basketball players, we’re really supposed to shut up and dribble. But I’m glad we do a bit more than that.”

© Getty Michael Jordan has led the tributes to Bryant

His daughter Gianna’s budding basketball career had become a life passion for him and the pair were often seen cuddling together at basketball games, sharing pointers on the match.

Bryant spoke of Gianna – known as Gigi – and her love for basketball during an appearance on the Jimmy Kimmel Live! entertainment show.

© Getty Bryant and Jordan facing off in 1997Bryant, who had four daughters, said fans would constantly ask him if he wished he had a son.

“(Gianna will) be standing next to me, and it’ll be like, ‘And you gotta have a boy. You and V gotta have a boy, have somebody carry on the tradition, the legacy’,” he told Kimmel. 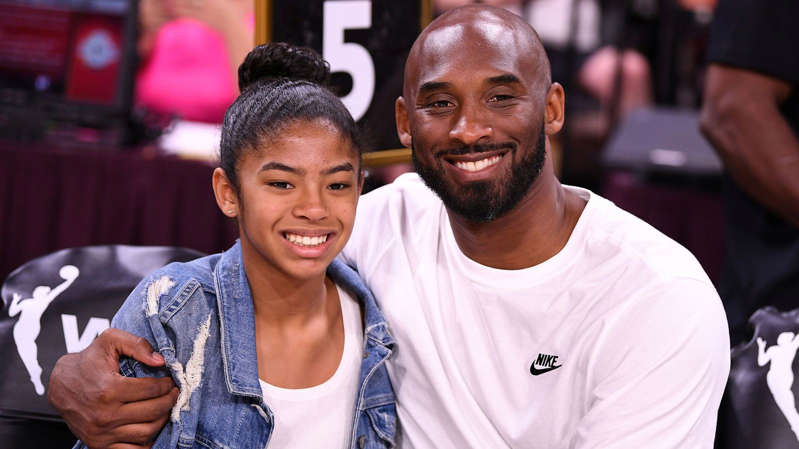 The pair would regularly fly on Bryant’s helicopter to watch matches and to his Mamba Sports Academy in California.

Bryant’s public life was not without controversy, though.

In 2003, when Bryant was at the height of his powers, he was accused of sexual assault by a 19-year-old woman working in a Colorado resort.

He denied the allegation, saying the two had consensual sex and the case was dropped after the accuser refused to testify in court. Bryant later apologised, saying she “did not and does not view the incident the same way I did”.

© Getty Kobe Bryant pictured with his five NBA titlesBryant’s wife Vanessa – whom he had met when she was 17 and he was 21 – briefly split from the basketball star, although the pair later reunited and had two more children.

© Getty Kobe Bryant in action for the Los Angeles LakersTheir youngest child, Capri, is just seven-months-old, while the eldest, Natalia, is 17.

Their family is mourning not only Kobe Bryant, but also 13-year-old Gianna.

Bryant’s fans are mourning one of the greatest athletes in history.

Bale will be ‘devastated’ after latest injury, says Coleman

November 12, 2017 Newsroom 1 Comments Off on Bale will be ‘devastated’ after latest injury, says Coleman