NBA commissioner Adam Silver admitted the league’s planned resumption “may not be for everyone” but he is confident player concerns will be addressed.

The NBA is planning to restart the 2019-20 season at Walt Disney World Resort via a 22-team format in Orlando next month after the campaign was suspended in March due to the coronavirus pandemic.

However, NBA players are reportedly divided about the season resuming amid the COVID-19 crisis and unrest in the United States, where there have been nationwide protests after the death of George Floyd while in police custody in Minneapolis on May 25.

Discussing the challenges facing the NBA as it tries to return, Silver told ESPN on Monday: “It may not be for everyone. It will entail enormous sacrifice on behalf of those players, for everyone involved – the coaches and referees.

“Listen, it’s not an ideal situation. We are trying to find a way to our own normalcy in the middle of a pandemic, in the middle of essentially a recession or worse with 40 million unemployed, and now with enormous social unrest in the country.

“And so as we work through these issues, I can understand how some players may feel, that it’s not for them … it may be for family reasons, it may be for health reasons they have, or it may be because they feel — as some players have said very recently — that their time is best spent elsewhere.”

Ray Allen on the importance of parents having conversations with their children about race. #NBAVoices #NBATogether 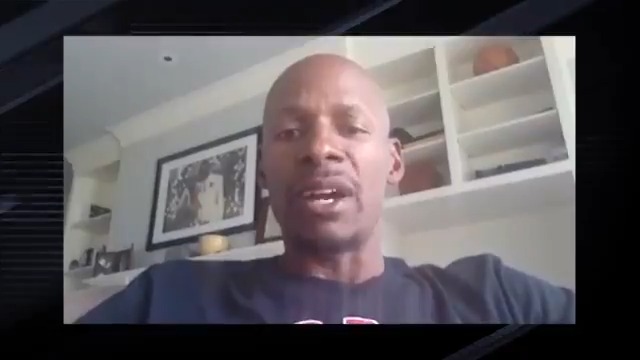 72 people are talking about this

Silver added: “Things are changing around us. The social unrest in the country was — in the same way we never could have predicted the pandemic would unfold, in the way it has — what’s happened since George Floyd’s death is also unprecedented.

“I’m incredibly sympathetic and empathetic to what’s happening in people’s lives. And in the midst of all that, to say, ‘We’re looking for an opportunity to restart this league, to try to move forward with crowning a champion,’ it’s not top of mind for a lot of people.”

“A lot of people pointed to the financial component of this,” Silver said. “The incremental difference between, at this point, playing and not playing, isn’t nearly as great as people think, especially given the enormous expense in putting this on.

“Really, it’s more a sense from the entire NBA community that we have an obligation to try this, because the alternative is to stay on the sidelines … in essence, give in to this virus … For us, we feel that this is what we do: We put on NBA basketball. We think that for the country, it’ll be a respite [from] the enormous difficulties people are dealing with in their lives right now.

“And in terms of social justice issues, it’ll be an opportunity for NBA players in the greater community to draw attention to the issues because the world’s attention will be on the NBA in Orlando if we’re able to pull this off. What should this league, that may have a unique opportunity as compared to almost any other organisation in the world, be doing in response to George Floyd’s death, to endemic racial issues in society? I’ve heard this loud and clear — the statements have been issued, foundations have been announced, contributions.

STEPHANOS TSITSIPAS BECAME THE CHAMPION OF THE TOURNAMENT IN MARSEILLES