Scott Brown has been here before.

A couple of poor results, players off form – and the inevitable questions asking if the champions are still up to the task.

To be fair to Celtic’s captain, when the flak is

flying he has never been one to take cover.

Despite enjoying a decade of success, Brown, his

team-mates and gaffer Neil Lennon got it in the neck last week after defeats to Rangers and AC Milan.

The skipper was subbed against the Italians in the Europa League, leading to queries about his own place in the team.

But Brown is used to it. When it comes to criticism, he’s like Teflon and with Lennon’s men going for 10 In A Row, he’s not about to let it affect him now.

The 35-year-old is willing to take the brunt of it on his shoulders. And after admitting that some people probably want him to RETIRE, he’s ready to prove them wrong all over again.

The Celtic stalwart said: “I’ll take all the flak you want. I don’t really look on social media too much.

“After results like this there are always people who say: ‘Oh, he should retire, he’s not good enough to be playing.’

“Others will think: ‘They’ve not made the right signings.’

“But we have to stick together as a team. We need to be strong and make sure everything that happens stays in the dressing-room.

“It’s never going to be plain sailing at Celtic but it’s about how we react now.

“It’s only one bad result in the league (the Rangers defeat) but in any season there are ups and downs. It’s not always nice and easy.

“The lads have been unbelievable for nine years. We’ve shown professionalism and just need to keep hitting the standards we’ve set.

“We want to push ourselves as far as we can again. There have been disruptions, we’ve lost boys to Covid-19 but we need to deal with stuff like that and stay positive.

“We need to be strong and have the character to bounce back. With our record, we deserve to be trusted.

“But as a team we know we need to improve and start scoring more goals.

“From the goalie all the way through the strikers, we need to be better all over the park.

“But the main thing is to believe in ourselves.” 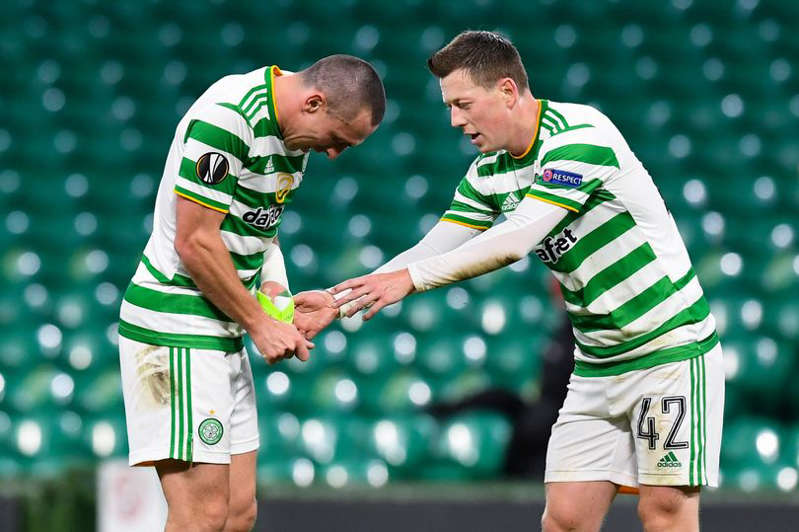 But Brown claims it has been hard for the squad to bond with coronavirus restrictions preventing them from eating or changing in the same area at their base at Lennoxtown.

He said: “The new boys have done well but every team is in the same position with the restrictions.

“We need to make the best out of a bad situation. It’s not ideal that we can’t be in the same dressing room or go for meals together. The key thing is that everyone is protected.”

Lennon’s switch to a 3-5-2 formation has also been the subject of debate, especially after it was exposed at home to Milan. Brown’s team-mates Callum McGregor and Ryan Christie both admitted that they’re more comfortable playing a 4-2-3-1.

So would the Hoops captain ever speak to his manager about tactics? He said: “We chat all the time about what we’re going to do, how we’re going to play. It could be myself and Callum or other lads too.

others. But it’s not always about systems.

“No matter what formation we play or who is in the team, it’s about working hard and getting results.”

Brown might not have been happy at being taken off after an hour against Milan but he accepts that NO Celtic player will hit 60-plus games this season.

“We need competition so there will be players in and out,” he said. “Due to the Covid situation we could end up with more players in isolation.

“We can’t rely on one person playing 65 games this season. So we have to protect our bubble and keep it tight. We have a great squad but it’s hard when you’re missing five or six players at one time.”

After today’s Premiership clash with Aberdeen,

Lennon’s men will be stretched again on Thursday night as they take on in-form Lille in France.

They need at least a point to kick-start their Europa League campaign and Brown said: “Europe is important and we still believe we can qualify from the group.

“This game in Lille is going to be huge. It won’t be easy but we have a good away record in recent seasons.

“Lille are top of the French league and that shows this wasn’t the easiest group. But we want to go through and feel we can.”

Mourinho: Zidane is the right man for the Real Madrid job