SAN JOSE, CA – In commemoration of Greece’s Bicentennial, the City’s iconic glass rotunda will be illuminated in blue and white lights from Tuesday, March 23rd through March 28th. This special tribute to the Greek American community was spearheaded by San Jose Councilmember Pam Foley of District 9.

Councilmember Foley will also honor Greek Independence Day at the Tuesday, March 30th City Council meeting where she will present a proclamation signed by Mayor Sam Liccardo and full council.

This was made possible by the combined efforts of the San Jose Chapters of the American Hellenic Educational Progressive Association (AHEPA) and the Daughters of Penelope (DOP) with the United Hellenic American Societies (UHAS) of California. 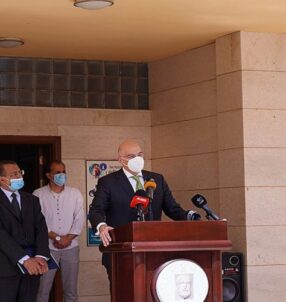