A new study has found that almost three quarters of Britons are unaware of new speed limiter legislation, which is set to be introduced in July. From July 6, 2022, all new cars sold in Europe must be equipped with speed limiter technology under a European Union directive.

While it has not been confirmed that the UK will follow suit, it is likely that the Government will introduce the same law, as they have done with other car manufacturing laws, for the sake of standardisation.

Around 74 percent of UK vehicle owners were unaware of any potential changes, with one third of young drivers saying they knew of the legislation.

More than 40 percent of drivers said they would be deterred from purchasing a new car if this technology is introduced.

This rises to more than 55 percent of those in the age group between 18 and 24, according to data from GoCompare.

While safety-enhancing features like parking sensors and cameras are welcomed by Britain’s motorists, the same cannot be said for mandatory speed limiters.

The European Transport Safety Council (ETSC), the body which supports the introduction of ISAs, says the limiters have the potential to reduce the number of collisions and save hundreds of lives every year.

The 2019/2044 regulation also mandates all new cars that have already launched be fitted with ISA technology by July 8, 2024.

There are concerns about how the technology will be enforced when driving, given fears of potential distractions for motorists.

Safety experts have suggested a visual or an audio alert could be used to prompt drivers to slow down once they go above the speed limit.

Many are critical, however, that audible warnings would annoy drivers, leading them to turn it off, which would make the speed limiting feature pointless.

Antonio Avenoso, executive director of the ETSC, said: “More than 20 years after this technology was first trialled, it is great to see Intelligent Speed Assistance finally coming to all new vehicles in the EU.

“However, we are disappointed that car makers are being given the option to install an unproven system that may have little safety benefit.”

This comes as in-car technology is on the rise, with increased investment into navigation, cameras and cruise control options.

The research also found that a staggering 77 percent of motorists wouldn’t trust a self-driving car to keep themselves or their families safe on the road.

With more vehicles now coming equipped with self-driving features, around 57 percent feel that driverless cars are simply a gimmick. 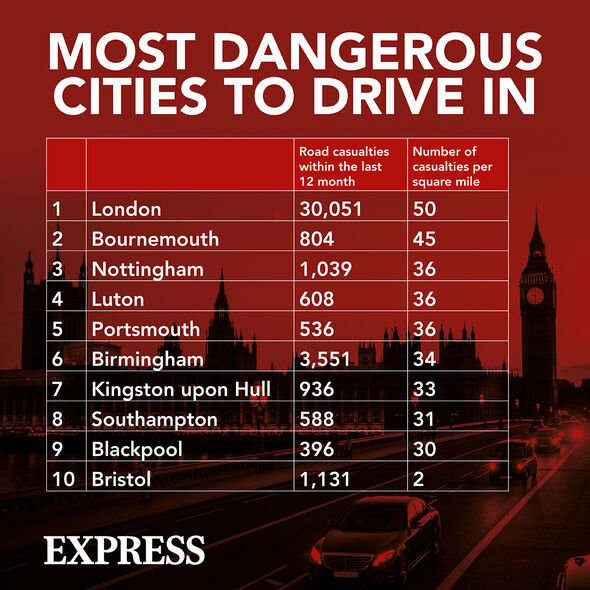 © Express Most dangerous UK cities to drive in.

This opinion was particularly strong among older generations, with 61 percent of drivers aged between 50 and 64 believing this, rising to 64 percent of those aged 65 and over.

In contrast, just 43 percent of motorists aged between 18 and 49 agreed with this.

Despite the distrust of fully autonomous vehicles, Britain’s car owners are giving the green light when it comes to assistive technology that makes driving easier.

Reversing sensors are seen as a must-have, with integrated navigation systems also popular among British motorists.