NEW YORK – John “Senior” Koufakis, the founder of Star Auto Group of Queens, and a driving force with the Greater New York Automobile Dealers Association, passed away on Long Island on July 8 at the age of 94, QNS reported.

Koufakis was born in the Chelsea neighborhood of Manhattan and worked with his father as a furrier at the young age of 12. His success was built on his early business ventures, starting off driving and owning a taxi cab, selling it and buying a Carvel franchise which he later converted into a fast-food eatery and, eventually, a used car lot.

Koufakis served in the U.S. Army from 1944-1945 and married his wife Georgia in 1949, settling in Jackson Heights before moving to Jamaica Estates, where they had three children. They eventually moved to Brookville, Long Island, but continued to operate the Star dealerships in northeast Queens.

“The foundation of Mr. Koufakis’ success was built on his extraordinary work ethic. The running joke was that if you worked 12 hours in a day you worked just half a day,” Star Auto Group said in a statement announcing their founder’s death. “He was still coming to work until very recently. He also had extremely high integrity and his word was his bond. He did many construction projects without a contract. After his honeymoon, he had just $3. He borrowed money to buy a taxicab. He went on to sell the taxi to buy a Carvel franchise. Finally, in the 60s, started a used car lot called ‘Village Motors.’ Working with his sons they acquired a Chrysler Plymouth franchise in 1982. Today, the Star Auto Group is one of the largest auto groups in the Northeast.”

Koufkis served on the board of directors of the Greater New York Automobile Association from 1988 to 2009, and as chairman of the Membership Committee from 1996 to 2001. Currently, Star Auto Group is a franchised new car dealership that represents Chrysler, Jeep, Dodge, Fiat, Toyota, Subaru, Hyundai, and Genesis.

Koufakis shared his responsibilities with his three sons, John Jr., Steven, and Michael who all participate in managing Star dealerships.

Tragedy struck in May 2009 when the matriarch of the family, Georgia, was killed in a car accident, at age 83. The couple was driving near their Brookville home when their car collided with another vehicle on Route 106.

“She was in such good health and then to be gone in just one minute,” Koufakis said at the time. “We were just one month shy of our 60th anniversary.”

The couple met in their teens and learned that both of their families were from the same village in Crete. The priest at her funeral service, held at the Greek Orthodox Church of the Resurrection in Brookville, shared that the word family is an acronym meaning “Forget About Me, It’s Loving You.”

“She was generous and very caring person,” Koufakis said. “She held our whole place together.”

As her children grew, she got involved in community organizations, joining the Jamaica Estate Federation of Women and Nassau County Museum of Art. She was also a patron of the New York Institute of Technology and a benefactor to the church she and her husband helped to build. Koufakis remained deeply involved with the Greek Orthodox Church and organizations that support children with special needs, such as Life’s WORC, ELIJA Foundation, and The School for Language and Communication.

In addition to their three sons, Koufakis is survived by his three beloved daughters-in-law, 11 grandchildren and one great-granddaughter, as well as nieces and nephews.

“The Star Auto Group would like to express our heartfelt condolences to the Koufakis Family for their loss,” his company concluded. 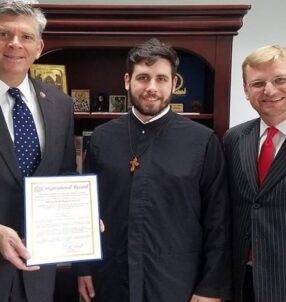