You are here: Home  /  LIFESTYYLE  /  Jennifer Lopez and Ben Affleck ‘confirm’ reunion as they share kiss in public
LIFESTYYLE Jennifer Lopez and Ben Affleck have “confirmed” the rumours of their romantic reunion.

Speculation that the exes had started another relationship began in May after the pair holidayed together in Montana.

Now, in a video obtained by Page Six, the couple can been seen nuzzling each other’s necks and sharing kisses in public.

According to the outlet, they were in Malibu.

In the early 2000s, Lopez and Affleck were one of Hollywood’s most famous couples. They regularly made headlines after a high-profile engagement in 2002 and, during their time together, co-starred in Kevin Smith film Jersey Girl and the flop Gigli.

Their relationship came to an end in January 2004, shortly after they postponed their wedding days before it was due to take place.

Affleck went on to marry and divorce Jennifer Garner, while Lopez recently announced her separation from fiancé Alex Rodriguez.

Their reunion has seen a resurgence in the phrase “Bennifer”, a moniker given to the couple.

The pair have been regularly seen spending time with each other over the past month. 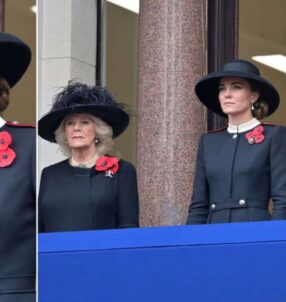 The Duchess of Cambridge wears Alexander McQueen ensemble at Cenotaph