Boris Johnson is facing a possible fourth inquiry into the funding of the lavish refurbishment of his Downing Street flat, after Labour demanded a probe by parliament’s standards commissioner into whether the prime minister breached Commons conduct rules.

The development came as a former member of the Electoral Commission told The Independent that Mr Johnson could be forced to resign as PM if the democracy watchdog finds wrongdoing in the “cash for curtains” inquiry it launched on Wednesday.

The embattled PM insisted that there was “nothing to see here”, as he restated his position that he paid personally for all spending beyond the £30,000 budgeted annually from the public purse.

But Sir Keir Starmer said the PM’s repeated dodging of questions meant that the real issue had become: “What is he hiding?”

And senior parliamentarians queued up to condemn the PM’s failure to explain whether he initially tried to get money from wealthy donors or the Tory party to settle the massive bill for designer curtains, wallpaper and furnishings after fiancee Carrie Symonds complained of the “John Lewis nightmare” left by the flat’s previous occupier Theresa May.

Former Conservative attorney general Dominic Grieve called on him to resign as PM if he is shown to have bent the rules.

Asked if the “cash for curtains” scandal should lead to Mr Johnson’s demise, Mr Grieve told Sky News: “If the facts are as they currently set out, it ought to, yes, because of the sheer level of the dishonesty that’s taken place. Whether it does is quite another matter.”

It was “plain” that Mr Johnson was trying to hide something embarrassing, said the former cabinet minister.

“It’s disgraceful that the prime minister of the United Kingdom should be playing games like this,” said Mr Grieve. “He could tell us the whole truth in 10 minutes’ time if he chose to do so. And he’s clearly decided not to do that.

“So one has to assume from it, that in fact there is something disreputable about it and indeed the evidence, such as has emerged, suggests that he has been dishonest and has lied about where he got the money.”

The chair of the parliamentary all-party anti-corruption group, Labour MP Margaret Hodge – who previously conducted an inquiry into the failed Garden Bridge project from Mr Johnson’s time as London mayor – said the PM’s “nonchalant attitude towards obeying the rules” caused her “huge concern”.

“I’ve watched Boris Johnson down the years,” said Dame Margaret. “This is a person who simply will not abide by the rules, and those rules and standards in public life are fantastically important – openness, honesty, accountability, they really matter for us to have confidence in the prime minister at the head of our democracy.”

Questions over whether wealthy individuals are able to buy access, influence or contracts “go beyond Downing Street to the actual way in which we govern ourselves, and that’s where I really fear that we’re losing our moral integrity as a strong and well-developed democracy,” she said.

Parliamentary standards commissioner Kathryn Stone declined to confirm whether she is opening an inquiry into whether Mr Johnson breached the MPs’ code of conduct.

Changes in the rules which will permit Ms Stone to name MPs under investigation do not come into effect until 10 May – four days after crucial elections in which the PM will be hoping that sleaze allegations do not impact on Tory performance in English councils and mayoralties and devolved parliaments in Scotland and Wales.

An investigation by her could be doubly awkward for the PM as the committee she advises has already warned it is ready to use tough sanctions– potentially including suspension from the Commons – against Mr Johnson after he twice flouted regulations on registering his financial interests as a backbench MP.

Separate probes have also been launched by the PM’s independent ethics adviser Lord Geidt and the head of the civil service Simon Case, both reporting to Mr Johnson himself.

One former Electoral Commissioner, speaking under condition of anonymity, said the PM was facing potentially very serious consequences if it is found that donations and loans to fund the £88,000 No 11 refit were not properly declared.

While a breach of that kind was unlikely to see the Commission use their powers to refer case to police or prosecutors, it could lead to a public rebuke and fine of up to £20,000 for the party or an individual MP.

And the ex-commissioner told The Independent: “If you have breached the rules this way as prime minister, then I think you have to consider your position.

“He is caught in a cleft stick, really, if he has failed to declare a donation, because he has told parliament that it was all above board. And if he has misinformed parliament, that in itself is a resigning matter.”

Commission officials are likely already to have demanded full documentation from the Conservative Party surrounding any gifts or loans, and may then seek to interview all those involved, potentially including Mr Johnson and Ms Symonds, former adviser Dominic Cummings and Tory donor Lord Brownlow, who offered in a leaked email to put £58,000 towards a trust to pay for renovations which he would himself chair.

Interviews will take place in the individuals’ offices or at the Commission HQ before a report is submitted to the nine-member panel of commissioners, which includes representatives of the major parties.

If all witnesses cooperate, a report could be produced within two or three weeks, said the ex-commissioner. But if the inquiry drags on longer it could mean the watchdog has been forced to use its legal powers to obtain records from computers, phones and letters.

“My advice to the prime minister and the Conservative Party would be to cooperate, because the sooner you get this wrapped up the better – unless you’ve got something to hide of course,” said the ex-commissioner. “If anyone is trying to hide anything, the officials have got the forensic accounting skills to deal with that.”

During a visit to a London school on Thursday, Mr Johnson promised to “comply with whatever they want” adding: “I don’t think there is anything to see here, or worry about.”

He joked: “The one thing I object to in this whole farrago of nonsense is I love John Lewis.”

Hours later, Sir Keir trolled the PM by visiting the Manchester branch of the upmarket department store to browse for wallpaper.

The Labour leader challenged Mr Johnson to come clean on the full process of funding the refurb: “The prime minister could actually end this now, tell us who paid for it in the first place, answer the question, it would take him about one minute and then he can get back on with the day job.”

But he added: “The question’s really moved on. The first question is who actually paid for this redecoration in the first place. The second question, I think, is probably the bigger question now: why is the prime minister not prepared to just answer that question? What is he hiding?” 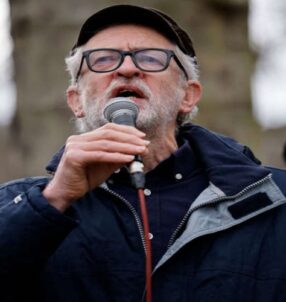