Royal expert Katie Nicholl has said the Royal Family feel Prince Harry has “thrown them under a bus,” amid the fallout from Monday evening’s airing of the Oprah Interview. The Duke and Duchess of Sussex laid a string of heavy allegations at the door of the Palace during the tell-all interview. The couple insisted that they had not been supported through battled with mental health and hinted race had played a role in the decision to deny their so Archie a royal title.

Ms Nicholl addressed how these bombshell revelations had gone down with senior royals.

She told Entertainment Tonight: “The talk at the Palace is that they are absolutely horrified by what has been said.

“They feel that Harry has literally thrown the family under a bus.”

The Duke and Duchess of Sussex spoke to the US TV legend in an interview that aired on ITV on Monday night.

In the bombshell chat, Meghan claimed that there had been “concerns and conversations” when she was pregnant with Archie about how dark her baby’s skin might be.

These comments were allegedly made to Prince Harry, who refused to identify who said them, although later clarified to Oprah that it was not the Queen or Prince Philip.

In response, Buckingham Palace released a statement that read: “The whole family is saddened to learn the full extent of how challenging the last few years have been for Meghan and Harry.

“The issues raised, particularly that of race, are concerning.

“While some recollections may vary, they are taken by seriously and will be addressed by the family privately.

“Harry, Meghan and Archie will always be much-loved family members.”

At the time Ms Nicholl said that it was a “very loaded line”.

Ms Nicholl added: “It’s clear that the Royal Family want to deal with this as a family, first and foremost.”

Meghan told Oprah in her explosive one-to-one that the subject of her baby’s skin colour was raised when she was pregnant with Archie, who is nearly two years old now.

She claimed that around that time was also when she was told her baby would not be a Prince or Princess or receive state-funded security.

She said: “In those months that I was pregnant, all around the same time, so we had in tandem the conversation of he won’t be given security, he’s not going to be given a title, and also concerns and conversations about how dark his skin might be when he’s born.

“There were several conversations with Harry [about how dark her baby’s skin might be] potentially and what that would mean or look like.” 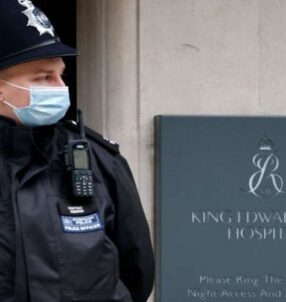