You are here: Home  /  ECONOMY  /  UK trade has shrunk since Brexit while EU thrives – data
ECONOMY UK trade has shrunk since Brexit while EU thrives – data

Since Brexit manifested early this year, the Government has attempted to reforge the many trade deals it held as an EU member. Liz Truss has helped establish several since January 1, setting off ambitious targets to cover 80 percent of UK trade with free trade agreements by 2022. But data from the Bank of England shows that, despite her efforts, the UK’s trading prospects have shrunk.

On December 3, the Bank of England released data showing the UK’s trading habits over the last 24 years.

The bank added imports and exports and exhibited these “trade flows” as a percentage of GDP per year for the UK and “EU Main Countries” since 1997.

The data shows at the turn of the millennium, the country was nearly on par with the rest of the bloc, as each reported trade worth between 50 and 60 percent of GDP.

A vast chasm opened after 2011 when the EU started growing at a much more exponential rate, and this became even more pronounced between 2019 and 2021.

When Britons voted for Brexit in 2016, the UK’s trade flows sat at around 58 percent and the EU’s at 72 percent.

British GDP from trade reached its highest since 2006 in 2019 when it hit around 62 percent.

At the same time, the EU maxed out at roughly 75 percent, its highest in recorded history.

Both suffered losses when the pandemic hit in 2020, but only one has recovered. 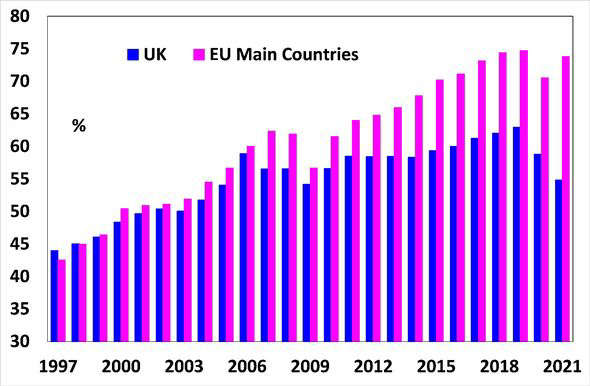 The UK has not seen its trade bounce back since the official exit date of January 2021.

According to the Bank of England data, trade as a percentage of GDP was around 54 percent, down from near 56 percent in 2020.

At the same time, the EU has increased its trade close to 2018 levels.

The news will have come as a blow to ministers working towards their 2022 targets.

Trade agreements negotiated by Ms Truss have done little to boost the UK’s imports and exports, with experts criticising the amount they will prospectively bring in.

She has so far secured arrangements with Australia, New Zealand and Japan.

Altogether, they will barely contribute to UK GDP, between zero and 0.16 percent respectively.

At a maximum, these deals could provide a further £3.4 billion and take up to a decade to implement.

The Government now has its sights set on the US, which it has teased as a trade partner able to plug up EU-sized holes since the Brexit vote.

But the National Audit Office (NAO) has urged ministers not to rush future agreements.

Speaking to The Times, Angus Brendan MacNeil, chairman of the international trade committee, said they should focus on “getting deals right”.