Nine EU member states have called on the EU’s chief diplomat, Joseph Borrell, to have a strategic discussion on the Western Balkan countries and their prospects when EU foreign ministers meet in April, according to a letter made available to EURACTIV.

“We believe it is high time we take a strategic look at the Western Balkans,” foreign ministers of Austria, Croatia, Czechia, Germany, Greece, Ireland, Romania, Slovakia and Slovenia wrote.

In the letter, dated 5 March, they argue that “a lot has changed” since the last enlargement discussion in August 2019, particularly that “there have been dynamic internal political developments in the countries of the region”.

The enlargement process seemed to have gained new momentum last spring when North Macedonia and Albania received the green light from EU ministers to start negotiations later that year.

However, the process ran into another stumbling block when Bulgaria vetoed North Macedonia’s talks in autumn over differences regarding history and language.

Bulgaria’s veto also affected Albania as EU members see the accession of Skopje and Tirana as a ‘package deal’. Lack of concrete progress plays into the hands of Western European countries, particularly France, whose public opinion has grown sceptical of further EU enlargement, especially in light of the upcoming presidential elections in 2022.

Though the EU is the Western Balkans’ biggest donor and trade partner, efforts to bring the region closer have been set back by the bloc’s demands for reforms, and the countries’ reluctance to implement them.

“The pandemic has exacerbated already existing trends, including geopolitical implications. Other actors are ready to step in the regional affairs, often at our expense,” the nine EU foreign ministers wrote in reference to the EU’s late and highly criticised handling of support for the region in various stages of the COVID-19 health crisis.

Western Balkan countries Albania, Bosnia, Kosovo, Montenegro, North Macedonia, and Serbia – home to some 20 million people – have struggled to get access to COVID-19 vaccines from multiple companies and programmes and will lag far behind the EU27’s efforts to reach herd immunity through quick and mass immunisation.

“While the EU has mobilised massive amounts of support to the region, other actors were more effective in presenting their support and thus undermining our reliability, credibility and perception of our solidarity,” the letter signatories pointed out.

Croatia’s foreign ministry said in a separate statement sent to EURACTIV that “having a comprehensive approach to the region was important for the credibility of the EU, as its most important partner”. The statement particularly stressed the need “to help Bosnia-Herzegovina for the sake of improving its functioning and stability”.

Critics have long suggested that China’s “mask and vaccine diplomacy” aimed to build a rapprochement with the Western Balkans at a time when collaboration between Brussels and Washington was poor.

“As the EU, we should approach the region not only through the enlargement lens but also through foreign policy optics,” the nine foreign ministers stressed, adding that the EU should think about “how to respond to the internal developments on the ground and to the more active engagement of the third actors”.

An EU diplomat familiar with the enlargement issue also underlined the importance of a pro-active EU policy in the region.

“All the Western Balkans countries have a different status in terms of EU integration, but the point is to allow them to progress, to open negotiations. We all know it is going to be a long and winding road but we need to have them engaged in the process,” he told EURACTIV.

“If we don’t push this agenda, we will allow other players to have a political and economic influence in the region, which is most certainly not in the EU’s interest,” the diplomat cautioned.

The EU foreign ministers also noted that, under Joe Biden, “the United States is preparing to re-engage with the region”, and stressed that “working shoulder to shoulder with them as our key partner, requires from us having a common stance”.

Under the previous Trump administration, Kosovo and Serbia agreed on a pact to normalise economic relations, without notable EU involvement.

Officials in Brussels now hope that a transatlantic reset will also help revive the EU-led Belgrade-Pristina dialogue, which is a precondition for both countries to advance their EU prospects.

Western Balkans was one of the regions – along with China, Russia, Belarus, Ukraine – President Biden and European Commission President Ursula von der Leyen agreed to coordinate on during a call last week..

Poland, traditionally a strong proponent of an active enlargement policy, was not among the signatories, but a Polish diplomat told EURACTIV that it is “common practice in the EU for member states to present their expectations in different formats and configurations”.

“Poland supports the EU enlargement policy. The process of enlargement is an important tool to promote security in the Western Balkans, which also means security in Europe. This is why we support the arguments included in the letter initiated by Slovakia,” the diplomat added. 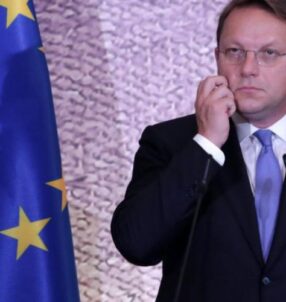