President Xi Jinping is attempting to pit China as the next great space super-power. Their new project is part of a wider call for research proposals from the National Natural Science Foundation of China, a funding agency managed by the country’s Ministry of Science and Technology. To put it into perspective, the International Space Station (ISS) is just 109 metres (0.1 kilometres) across.

China’s spacecraft proposal amounts to ten times the size of the ISS.

In order to build it, China would have to send components up to space on rockets and somehow assemble the spaceship in zero gravity.

The country’s foundation said it was looking at “space equipment for future exploration” with the goal of having a “long-term stay” in orbit.

In addition to this, China is also assembling its own space station just like the ISS.

The main section of China’s Tiangong space station was put in orbit back in April, and was inhabited for 90 days this year.

It is currently floating 236 miles above the Earth.

This has enabled the country to plan another 11 missions in the next year and a half to finish off the building process.

Many experts have raised an eyebrow at China’s plans to build a one kilometre long spacecraft.

But according to a BBC Science Focus report, we shouldn’t “make the mistake of dismissing it just yet”.

Brian Harvey, author of the book ‘China in Space: The Great Leap Forward’, told the publication: “It’s about ambition, long-term thinking and instilling a sense of purpose.

“Such long-haul thinking does not fit in well with shorter-term western thinking, which might mistakenly dismiss this as propaganda.” 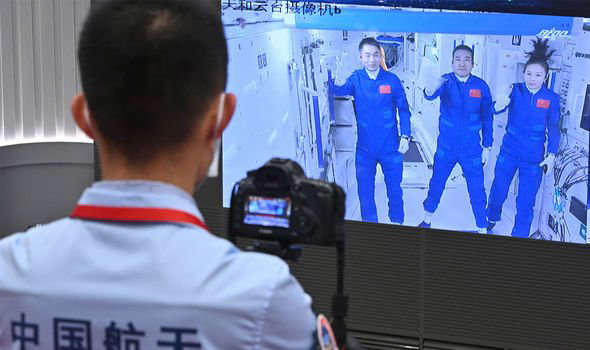 © GETTY Space news: In recent years China has upped the speed in which it hopes to become a space superpower

In recent years, China has pitted itself as a serious space power.

It has returned lunar rock samples to Earth for analysis, making it the third country behind the USA and Russia to do so; it has also landed a rover on Mars, a feat that only the USA had previously managed; and it has made the world’s first landing on the lunar far side.

Mr Harvey pointed to a Chinese report published in 2009 called ‘Roadmap 2050’ – the blueprint for how China plans to become the world’s leading space-faring nation by the middle of the century.

He said: “The horizon to Chinese spaceflight is not years or decades but half-centuries.”

It is just one in a string of forward-looking plans that China has.

As Science Focus noted: “In other words, this most recent announcement is the beginning of China thinking about how to build such a spacecraft in the future, rather than a declaration that it intends to begin construction.”