You are here: Home  /  EUROPE  /  Commission unveils plan to halve pesticide use and risk
EUROPE Commission unveils plan to halve pesticide use and risk

The European Commission has proposed to slash in half the use and risk of chemical pesticides by 2030, confirming the level of ambition enshrined in the European Green Deal despite food insecurity threats in light of the Ukraine war.

Originally pencilled in March, the adoption of the proposal has been slightly delayed because the College of Commissioners has been busy with other political priorities.

In particular, the ongoing Russian invasion of Ukraine created deep concerns about global food security that needed to be addressed as a matter of urgency, according to EU Food Safety Commissioner Stella Kyriakides.

“These concerns are valid. But they do not make action on pesticides any less urgent,” she told a press conference after the presentation of the proposal.

Commission Vice-President Frans Timmermans echoed her remarks, saying that some have seen the war as an excuse to pull the brakes and put on hold the implementation of the Farm to Fork strategy.

“Using the war to water down our proposals and scare Europeans is, frankly, quite irresponsible,” he said.

According to him, science confirmed that the climate and biodiversity crises are the real threat to food security and this is why the Commission has started tackling them.

Kyriakides stressed that the main objective of the proposal is not to ban pesticides but to replace them with safe and sustainable alternatives. “This is making pesticides a last resort measure.”

National target at no less than 35%

While there will be an overall legally binding target to reduce the use of chemical pesticides by 50% by 2030, member states will be asked to set their own national reduction targets within defined parameters.

In this sense, the Commission opted not to present individual-specific binding targets but recognised instead that there are differences in many EU countries in terms of their use of pesticides as well as the challenges they face.

In order to be sure that every member state moves in the same direction, some limits will be set on how countries can vary from the general target.

“If they want to move away from 50%, then they have to have very clear justifications for doing that,” commented a senior Commission official.

These justifications can be linked either to historical progress in reducing pesticides that countries have already made or to the intensity of the use of pesticides.

The intensity parameter, in particular, will look at the average pesticide application in kilograms per hectare of agricultural areas, so that those member states whose use of pesticides is more intensive will have to do more.

However, the national reduction target cannot in any case be lower than 35% for both use and risk of pesticides.

A Commission official confirmed to EURACTIV that this flexibility followed a discussion with some member states who were concerned about how the targets might be set.

The request for a differentiated approach was recently stressed by the Czech Agriculture Minister Zdeněk Nekula, who pointed out that certain countries have already made progress on pesticide reduction “and, de facto, they have already achieved the European general target for such a reduction”.

From directive to regulation

A major change in the revision of the pesticide framework is in the legal framework, as the previous one was a directive.

The new Sustainable Use of pesticide regulation (SUR) will be directly binding in all member states and without the need to transpose it through national laws.

“The problem we had in the past is that there was way too much room for manoeuvre in how to interpret the directive,” said a Commission official explaining the reasons behind the change in the legal framework.

Member states will also have to submit reports on annual progress in achieving their targets, as well as implementation reports, which would make the Commission scrutiny easier.

The regulation will include a ban on the use of pesticides in urban green areas, public parks, gardens, playgrounds, recreation sports grounds, and ecologically sensitive areas.

The use of all plant protection products will be also prohibited within three metres of such sensitive areas, a requirement taken from the good environmental practice in the Common Agricultural Policy (CAP).

The Commission is also planning to accompany the pesticide reduction by increasing the range of biological and low-risk alternatives on the market and through continued research, innovation and new technologies.

“Since the start of our mandate, we have approved 20 low-risk alternatives. This work will now continue and accelerate,” Kyriakides said.

For the EU’s plant protection products association CropLife Europe, any proposed targets should ensure that there are viable and effective alternative options on the market.

“If we truly want to transform the system, we cannot set arbitrary targets at the EU and national level that ends up alienating the very people that are producing healthy and sustainable food every day for European citizens and beyond,” CropLife Europe Director General Olivier de Matos said in a note.

For the NGO Birdlife Europe, this proposal is an optimistic start but it is far from perfect.

“There are still too many derogations and loopholes, rendering the law potentially useless in how much pesticides will be used across Europe,” said Marilda Dhaskali, Birdlife’s agriculture policy officer.

“Changing the cure will not erase the disease: At a time of increasing climate pressure and of new emerging pests, plant protection is a necessity on the farm, not an option,” said CEJA President Diana Lenzi. 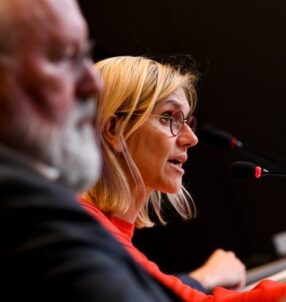