You are here: Home  /  CYPRUS  /  Cyprus considers Tatar’s statements as another effort to promote his position on ‘sovereign rights’
CYPRUS Nicosia considers that statements made by Turkish Cypriot leader, Ersin Tatar, in an interview he gave to “Phileleftheros” newspaper is another effort to promote his positions that the Turkish Cypriot puppet regime constitute a separate “entity” and about Turkish Cypriots` “sovereign rights”.

Invited to comment on Tatar`s statements, a source told the Cyprus News Agency (CNA) he made them “with a view to promote his position for sovereign rights and to show that the pseudostate exists as an entity which makes proposals.”

In relation to the issue of Confidence Building Measures (CBMs) the source noted that it is Cyprus President, Nicos Anastasiades, who has submitted a set of such measures from which both communities would benefit and which would improve the climate for the resumption of the negotiations for a Cyprus settlement.

President Anastasiades said on Saturday asked about his next steps that he will present a complete proposal to the European Council “for the need for Europe to undertake an initiative for a solution to the Cyprus problem and the adoption of essential confidence-building measures that will restore, first of all, trust and secondly, pave the way for a new, constructive dialogue.”

These issues will also be among the matters which Foreign Minister, Ioannis Kasoulides, will discuss with his US counterpart, Antony Blinken, during their talks at the State Department on February 1st. Kasoulides is paying a working visit to the US, where he will also meet with other officials, at Blinken`s invitation.

In his interview, Tatar insisted on the recognition of “equal sovereignty” and “international status” and claimed that two separate states exist in Cyprus.

Meanwhile, President Anastasiades is expected to fly on February 10 to Brest France, to participate, at the invitation of French President, Emmanuel Macron, in the “One Ocean Summit” that will take place on February 11. Anastasiades may hold on the sidelines of the Summit bilateral meetings with other state leaders, who will attend it.

Cyprus has been divided since 1974, when Turkey invaded and occupied its northern third. Repeated rounds of UN-led peace talks have so far failed to yield results. The latest round of negotiations, in July 2017 at the Swiss resort of Crans-Montana ended inconclusively. 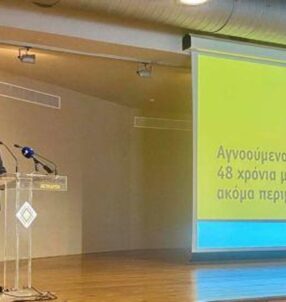