Home quarantine will not stop Covid-19 variants coming into Britain because it is not working as originally hoped, a leading scientist said today.

Imperial College London epidemiologist Professor Neil Ferguson stressed the effectiveness of the system is proving to be “much lower” than expected.

This flaw could explain the Government’s apparent shifting of the traffic light system for foreign travel to say people should not go on holiday to “amber” list countries.

People are supposed to quarantine at home for 10 days on their return from these destinations and take a Covid test on, or before, day two and on, or after, day eight of the self-isolation period.

Prof Ferguson, whose team’s work was key to the first lockdown in March 2020, told ITV: “We have learned lessons in the last few weeks about the effectiveness of let’s say home quarantine visitors which I think is much lower than we might have hoped.

“If you’re wanting to stop variants coming into the country through border measures then the only really effective way of doing that is quarantine outside the home.

Prof Ferguson said variants could only ever be stopped “to some limited extent” and there were decisions to make about whether that outweighed the free movement of people and allowing the travel industry to restart.

“I think the science is becoming clearer but still effectively it is a policy and political decision.”

Tens of thousands of checks on people home quarantining are now been carried out to strengthen the system.

The Government has been accused of being too slow to put India on the “red” list of countries to severely restricts arrivals from there into the UK where there are now a number of outbreaks of the Indian B1.617.2 variant including in Bolton, Bedford and Blackburn.

Asked if the Government had been too slow to act, Justice Secretary Robert Buckland said: “We’ve already announced an independent inquiry, a public inquiry that will be held.

“That was going to be the moment when we were going to be able to look back calmly and coolly and look in the open at all the evidence, and work out what went right, what didn’t go so right, and how we can learn from this experience.

“That’s going to be the time for reflection, not in the heat of the fight that we are still conducting against this virus.”

Mix-and-match vaccines could give better protection

“A Spanish study reported just in the last 48 hours and that showed by mixing doses, after the second dose you got a much higher antibody response,” he explained.

“What we know is that the Pfizer and Moderna and AstraZeneca vaccines are very similar in the immune response after the first dose, but after the second dose, people who get Pfizer or Moderna get a higher antibody level than people who get AstraZeneca.

“So, I think it’s an entirely feasible strategy to boost immunity through a kind of second Pfizer or Moderna dose, and potentially the other way round. You know if somebody’s got Pfizer first, AstraZeneca is likely to be highly effective at boosting their immunity too.” 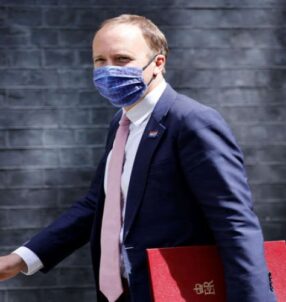