The London Fire Brigade (LFB) said all of a single storey workshop is alight. The Brigade’s 999 Control Officers received dozens of calls in relation to the blaze. Fire crews from six stations and several other nearby ones have rushed to the scene. It is not yet known what caused the fire.

The flames are several feet high, with thick plumes of black smoke quickly filling the sky.

The London Fire Brigade said: “Fifteen fire engines and around 100 firefighters have been called to a fire at a car workshop on Palmerston Road in Walthamstow.

“The whole of the single storey workshop is alight.

“The Brigade’s 999 Control Officers have taken 34 calls to the blaze. 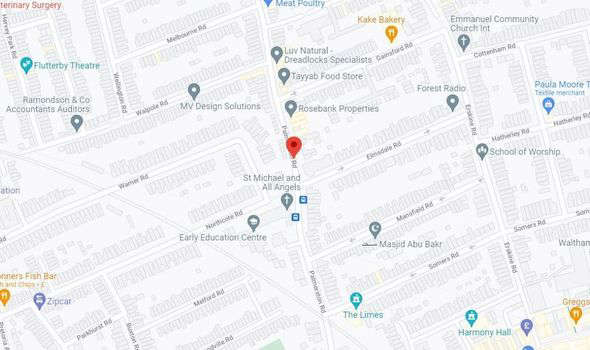 “The cause of the fire is not known at this stage.”

The LFB had earlier written on Twitter: “Crews are tackling a blaze at a single storey car workshop in Walthamstow.

“Twelve fire engines are now at the scene.”

Several people have taken to Twitter to describe the horrific scene.

Lady Mrs VB wrote: “Oh god, we saw the smoke when we were at St James street. Looks awful.”

Twitter user Anita commented: v“The fact I could actually smell this all the way from the mall.”

Martin Belam tweeted: “Looks like there’s a worryingly big fire in Walthamstow at the moment.”