Keir Starmer will launch his plan to maintain the momentum of Labour’s poll lead in the runup to the next election, accusing Boris Johnson of losing voters’ trust due to numerous sleaze scandals and treating power like a “branch of the entertainment industry”.

Keen to progress from criticising the government to presenting his own team as a viable alternative, Starmer is expected to flesh out how Labour hopes to spend 2022 climbing closer to power.

In a speech in Birmingham on Tuesday morning, the Labour leader will stress the importance of security, prosperity and respect, contrasted with months of what he called incompetent and untrustworthy behaviour by the prime minister.

Johnson has been blighted by fury over alleged Downing Street Christmas parties in defiance of Covid rules, his botched bid to save a disgraced MP who broke lobbying rules from suspension, and an investigation into payments covering the renovation of his Downing Street flat.

Labour has spent a month ahead in the polls for the first time in a year, while the Conservatives’ fall has sparked nervousness among Johnson’s ministers and backbenchers. Starmer’s party was also put 16 points ahead in a Deltapoll survey of 57 key “red wall” constituencies in its traditional heartlands, seen as crucial to winning back the keys to Downing Street.

Starmer will seek to paint himself as a patriot, saying 2022 will show off “all that the British have to be proud of” in a bid to neutralise Johnson’s rebuttals that the Labour leader should get behind the government when criticising its handling of Covid.

“I don’t think you cease to be a patriot because you notice your country has flaws,” Starmer will says. “On the contrary, the reason we in this party want to correct those flaws is precisely because we are patriotic. I came into politics to make things happen, not just to talk about them.

“I don’t think politics is a branch of the entertainment industry, I think it’s the serious business of getting things done.

Heralding a “new phase” for the country, Starmer is expected to warn of a looming cost of living crisis, with energy bills set to rise, wages stagnant and tax rises on the horizon, with the national insurance rise coming into effect in the spring. He will also claim that many people feel unsafe on the streets and that they have to rely on “good luck” to get a quick GP appointment.

Starmer will also acknowledge that a lapse in support for the Conservatives does not mean voters will automatically feel they have good reason to switch to Labour. He is set to say: “I am well aware that just because the Tories lose the public’s trust, it doesn’t mean Labour simply inherits it. Trust has to be earned. I am confident but not complacent about the task ahead.”

Ahead of May’s local elections, and what Labour figures think could be the final party conference in September before the next general election, Starmer will stress that “the best still lies ahead for this country – but only if we have the courage to create a new Britain”.

Johnson has been bullishly optimistic about the UK’s fortunes despite concern over whether fresh restrictions will be imposed due to the Omicron coronavirus variant. In his new year message, the prime minister insisted the country was in an “incomparably better” position than at the start of 2021. 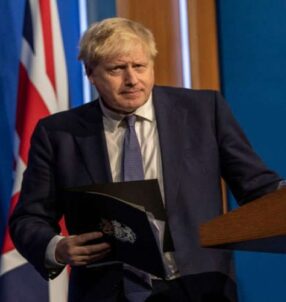