You are here: Home  /  CYPRUS  /  Kyriacos Tsioupras: Cypriot Who’s Who book a record of achievements
CYPRUS Kyriacos Tsioupras: Cypriot Who’s Who book a record of achievements

Kyriacos Tsioupras is the former editor of Parikiaki and Vema newspapers, former General
Manager of London Greek Radio, co-founder of the Cypriot Wine Festival, and former correspondent for RIK TV and the Cyprus News Agency.

Why are the publications of the ‘Cypriots in the UK’ and ‘Cypriots Worldwide: A Directory of Who’s Who’ very important?
The reason we have such publications is that it is a summary of the listing of communities in the UK and Cypriots worldwide. It’s a registry of what Cypriots have achieved in stages and what we are able to achieve in the future.

Why should these publications have a place in the Cypriot community?
Without these books we have an emptiness; we would not have a record of what we have achieved within our communities away from our homeland.
These books also give us a preview of our next stage, where we learn from our past, and it will get more interesting in the future.
Unfortunately no-one had the idea to register the previous 50 years and so it leaves a blank in our community – the young would have liked to know more about their ancestors, and Cypriots in our homeland would like to have known how their brothers and sisters and families coped with hardship and success in their lives.
It is 15 years since the last publication; you will find the new editions even more interesting.

Entrants are being invited for the new Greek Cypriots in the UK and Greek Cypriots Worldwide books. The publications are a snapshot of the worldwide Cypriot community today, a celebration of what they have achieved outside their homeland, and the greater potential that awaits them in the future.
It is free to nominate yourself, or someone you feel deserves to be included – Cypriots who have contributed socially or professionally to their communities, those involved in politics, media, business, sports, theatre, music and the arts, or who have carried out invaluable social and charitable work.
For further information, please visit www.cypriotsworldwide.com, call 07958 207 412 (UK) / 00357 99 887 329 (Cyprus) or email [email protected] 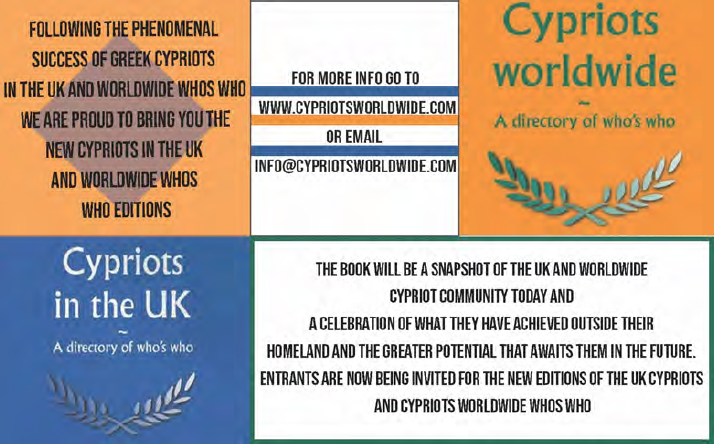