French leader Emmanuel Macron and challenger Marine Le Pen qualified on Sunday (10 April) for what promises to be a very tightly fought presidential election runoff on 24 April, pitting a pro-European economic liberal against a far-right nationalist.

With 97% of the vote counted in the first round, projections early on Monday showed Macron scoring 27,4%, with Le Pen on 24%.

The candidates for France’s traditional parties of government — the Socialists and the Republicans — were meanwhile on course for humiliating defeats and historic low scores.

Despite entering the campaign late and holding just one rally, Macron performed slightly better than expected and won immediate support from most of his defeated rivals ahead of the run-off.

“Make no mistake: nothing is decided,” he told cheering supporters at his campaign headquarters. “The debate that we are going to have over the next fortnight will be decisive for our country and Europe.”

He added: “When the far-right with all its forms is so high in our country, you can’t say that things are going well.”

Le Pen, an open admirer of Russian President Vladimir Putin until his invasion of Ukraine, had for months toured towns and villages across France. She focused on cost-of-living issues troubling millions and tapped into anger toward rulers.

Most candidates called upon their voters to block the way to Marine Le Pen. But it might not be enough this time as polls are already forecasting a tight race between Macron and the far-right leader.

The usual “cordon sanitaire” keeping far-right parties away from power will be put to the test in the second round of the presidential election.

Both Éric Zemmour and Nicolas-Dupont Aignan have endorsed Rassemblement national’s leader in their first-round speeches. All together, they have collected about a third of the total votes, according to the estimates.

“There is a man against Marine Le Pen who has brought in 2 million immigrants”, said Zemmour, adding that he “will not make a mistake about [his] opponent” and is calling on his voters to give their trust to Le Pen.

“With Éric Zemmour’s votes, we are the first political family in the country,” said a long-time RN supporter to EURACTIV.

Last night’s projections have confirmed that the victory was far from guaranteed for the incumbent president, with only a two-point difference, for instance, for the Ifop-Fiducial poll for TV channels LCI & TF1.

In 2017, the Emmanuel Macron had won in a landslide victory, obtaining 66% of the votes in the run-off.

The vast majority of the losing candidates invited their supporters to back either the incumbent president or to reject Marine Le Pen.

Socialist candidate Anne Hidalgo was the first to call for a vote “against the far right” in the run-off “so that France does not tip into hatred of all against all”.

“Marine Le Pen’s project would lead the country to discord, impotence and bankruptcy. Her historical closeness to Vladimir Putin discredits her in defending the interests of our country in the tragic times in which we live”, declared Les Républicains’ candidate Valérie Pécresse, disclosing that she will choose to vote for Emmanuel Macron in two weeks’ time.

The Green Yannick Jadot also called for “a barrage against the far right by putting a ballot paper in the ballot box for Emmanuel Macron”, saying that he was now counting on the latter to “create the conditions for a rally to defeat the far right”.

Sunday’s election confirmed, on the other hand, the foreseen death of the traditional parties.

Neither Pécresse nor Hidalgo made it to the top four, with a particular blow to the socialists, who haven’t even got 2% of the votes. 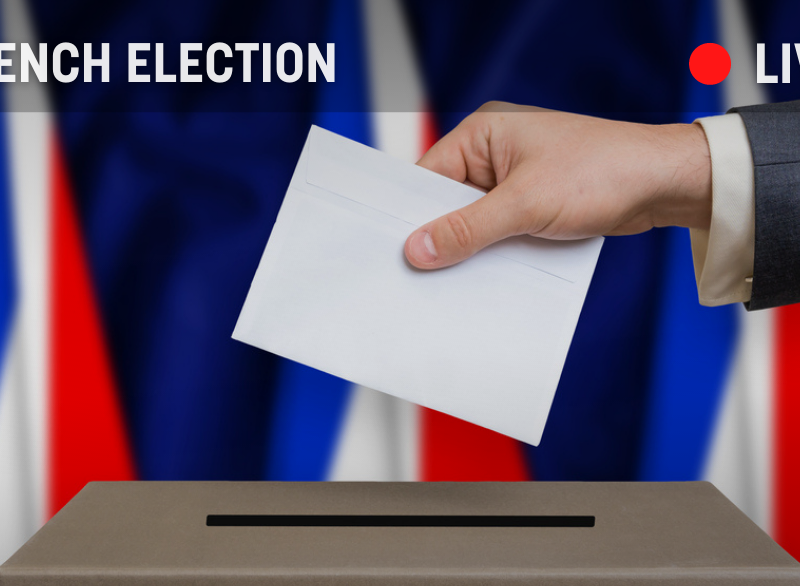 The French go to the polls on Sunday (April 10) to select which of the twelve candidates will make it to the second round of the presidential election to be held on 24 April, after a campaign disrupted by the war in Ukraine. Follow EURACTIV’s live coverage from Paris.

The election campaign has been overshadowed by the war in Ukraine, while surging prices of everyday goods have made the cost of living the overwhelming priority issue for voters.

The outcome of the two-stage election will have major implications for the European Union, which Le Pen says she wants to radically reform.

She has also said she wants to pull out of the joint military command of the US-led NATO military alliance.

Macron said Sunday: “I want a France that places itself in a strong Europe, that continues to form alliances with the world’s democracies to defend itself.

“Not a France which, once out of Europe, would only have the international alliance of populists and xenophobes as allies. That’s not us.”