You are here: Home  /  CYPRUS  /  Maronite Cypriots celebrate feast day of Saint George of the Seeds’ in Turkish-occupied Kormakitis
CYPRUS Maronite Cypriots on Wednesday celebrated the feast day of Saint George of the Seeds in the Turkish occupied village of Kormakitis, where a chapel built in 1931 is dedicated to the patron Saint of the village.

The service performed by Maronite Archbishop Selim Sfeir was attended by a representative of the Vatican, Presidential Commissioner Photis Photiou, Representative of the Maronite Religious Group in the Parliament, Yiannakis Mousa, and First Lady Andri Anastasiades, among others.

People gathered here, today, send a message for reunification and freedom, Photiou said in statements to the press, following the service. He made a special reference to the enclaved, noting that despite problems they decided to stay to their fatherland and for this reason the Government will always stand by them to help and support them.

“We send a message that the Maronite community is a source of hope for the country”, said Yiannakis Mousa, while First Lady Andri Anastasiades said she was touched by the event and extended her best wishes to everyone. 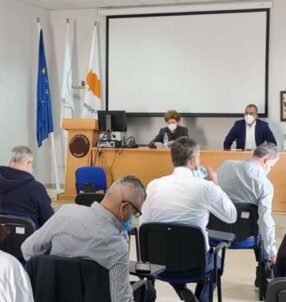