NEW YORK – The Hellenic Film Society USA continues the presentation of the New York Greek Film Expo at the Museum of the Moving Image (MoMI) in Astoria October 8-10 with an impressive selection of award-winning Greek films. The Expo opened with its October 1-3 run at the Directors Guild Theater in Manhattan with screenings of feature films including Tailor, Green Sea, the biopic Eftychia, and the quirky In Search of Laura Durand, among others.

While theater capacity is not up to pre-pandemic levels yet, and safety protocols were followed, many film-goers were excited to see films as they were intended, on the big screen. The indoor movie-going experience is a welcome sign that things are gradually getting back to some semblance of normal in New York City.

Winner of two Hellenic Film Academy Awards and three Thessaloniki Film Festival Awards, including the ERT Award, the FIPRESCI Prize, and the Youth Jury Award, Tailor, directed by Sonia Liza Kenterman, follows the trials and tribulations of the title character as changing trends in men’s fashion bring hard times to a master tailor. When the bank threatens to repossess his shop and his father is taken ill, he takes action with a wondrously strange tailor shop on wheels. Determined to survive, he reluctantly turns to sewing for women and manages to reinvent himself while bringing style to the brides of Athens. Tailor opened the Expo on October 1 and will be screened on Saturday, October 9, 4 PM, at MoMI.

Winner of seven film festival awards, including Grand Festival Award at the Berkeley Video & Film Festival, In Search of Laura Durand ranges from zany to poignant. The comic road movie, screened on October 3 at the Directors Guild Theater, blends various film genres and a lively 1980s indie rock soundtrack as it tells the story of two down-and-out musicians who embark on a search for a porn star of their youth who mysteriously disappeared several years ago. Prior to the feature film, the short film Cast-Outs (ΣΤΟ ΓΥΨΟ) directed by Alexandros Romanos Lizardos, Aki Melahri, was presented. The inventive animated short follows three hapless convicts as they plan a bank robbery.

Green Sea, directed by Angeliki Antoniou, is a thought-provoking film centered on food and memory. Anna has lost her memory but hasn’t forgotten how to cook. She gets a job in a working-class seaside taverna, where amid the aromas of old beloved recipes, she struggles to rediscover herself. Her dishes awaken memories for the regulars, who in turn help her reconnect to her past. The story takes an unexpected turn when her boss stumbles upon evidence about Anna’s true identity. The film will be screened Friday, October 8, 7 PM, at MoMI.

My Name Is Eftychia, the award-winning biographical drama, starring Katia Goulioni, in another mesmerizing performance, tells the story of the indomitable Eftyhia Papagiannopoulou, who escaped the burning of Smyrna and went to Athens where she became a seminal figure in Greek popular music, the beloved lyricist of Greece. Winner of eight 2020 Hellenic Film Academy Awards, including Best Film, Best Actor (Pigmalion Dadakarides), Best Supporting Actress (Goulioni), and Best Supporting Actor (Thanos Tokakis), Eftychia drew applause from the audience following the screening at the Directors Guild Theater on October 3 and will be screened on Saturday, October 9, 7 PM, at MoMI.

The National Herald A scene from the film Senior Citizen, directed by Limassol-born Marinos Kartikkis, which is among the selections at New York Greek Film Expo 2021. Photo: Courtesy of Hellenic Film Society USA 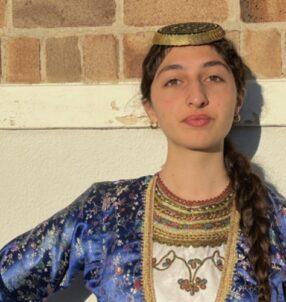