As Covid case numbers continue to rise across the UK and concerns grow about the impact of the Omicron variant the Government is reportedly drawing up a ‘Plan C’ set of restrictions and even a more severe ‘Plan D’ which could be implemented if the NHS is overwhelmed with patients.

Boris Johnson’s Government is brainstorming a number of stricter Covid regulations that would make up a new ‘Plan D’, according to Whitehall insiders.

Under the plan pubs and restaurants would only be allowed to serve outside, and this could translate into full closures if case numbers grew beyond control.

The move has come as concerns rise as to what the impact of the Omicron variant could be on the UK.

New modelling from the London School of Hygiene & Tropical Medicine (LSHTM) has predicted between 25,000 and 75,000 more deaths could be caused by the variant if no extra measures are imposed.

At this stage, the Government officially has no ‘Plan C’ but is considering tightening restrictions further due to the current Covid situation in the UK.

Yesterday, 54,073 new cases of Covid were recorded across the UK – which makes it the fourth day in a row that more than 50,000 cases have been announced.

Some 633 new Omicron cases were also reported on Saturday (December 11) which brings the UK’s total to 1,898.

London and the East Midlands are currently reporting the highest number of confirmed Omicron cases. 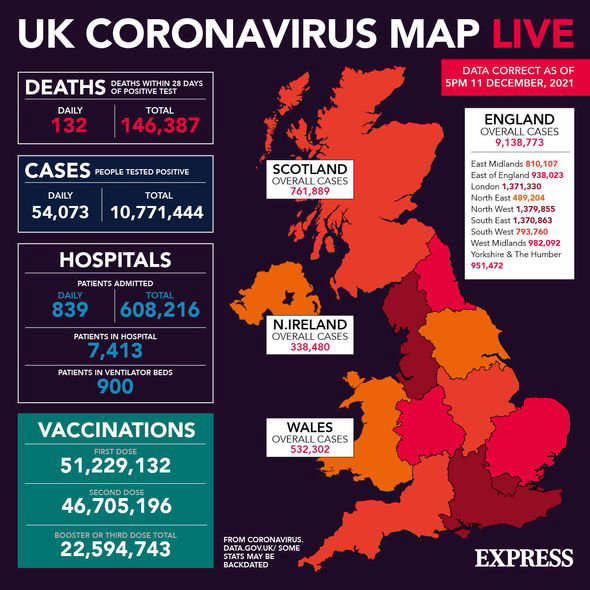 New Covid measures could be brought in by the Government as early as next week.

Restrictions that are being considered include extending the list of indoor venues where it’s compulsory for people to wear face coverings – such as hospitality venues and gyms.

Automatic 10-day self-isolation periods for all close contacts of a Covid case could also be reinstated – regardless of a person’s vaccination status.

What are the PM’s Plan B restrictions?

Last week the Prime Minister held a second Downing Street press conference, in less than two weeks, where he unveiled his Covid winter ‘Plan B’ to the public.

Under the new rules, it became mandatory – as of last Friday – for people to wear face coverings in most indoor spaces. For instance theatres and cinemas.

From Monday (December 13) the Government is reintroducing its guidance, in England, for people to work from home where possible.

In a message to the public the PM said: “Go to work if you must, but work from home if you can.”

Anyone deemed to be a close contact of a suspected Omicron case can also avoid a 10-day self-isolation period, under the latest rules, by taking daily lateral flow/antigen tests.

However, this rule won’t come into force until the new tests, which indicate the presence of the variant, are available.