Small celebration of Greek Independence at Melbourne’s Shrine of Remembrance

There were around 500 people who gathered at Melbourne’s Shrine of Remembrance on Sunday to celebrate 201 years since the start of Greece’s War of Independence on 25 March 1821 – and half of them were officials.

Tony Tsourdalakis, head of the Organising Committee for the Celebration of the National Anniversary, told the Greek Herald prior to the event that he had expected 200 to 300 attendees. Despite exceeding expectations in numbers, the celebration was a far cry from the droves that showed up in 2019, some of them booing Greek politicians who had supported the Prespes Agreement. As a result of this bad behaviour, the large parade was cancelled.

Ange Kenos, a member of the Organising Committee and the RSL state executive committee, told the Greek Herald the “shrine trustees were intent on making this a respectful event and that is why the parelasi (parade) was not held and will not be held at all, due to a small minority who thought they had more rights than anyone else and disrespected what this place is – holy ground.”

This year, it was a wiser group solemnly attending the first National Day celebration at the Shrine following the global pandemic. Without a parade, there were less students, Greek cultural groups and mayhem. But there was a lot of meaning packed behind the speeches of official guests and dignitaries, with both Victoria’s Premier Dan Andrews and Opposition Leader Matthew Guy present at the event.

A taste of Ukraine

Premier Andrews spoke Greek with little trace of an accent on what he called a ‘σπουδαία μέρα’ (significant day) in the “biggest Greek city outside of Greece”. The premier spoke of the importance of freedom and supported Ukraine.

It was Mr Guy’s emotional speech, however, which linked Greek Independence to the struggles of his own beloved Ukraine which showed how Greece’s struggle for freedom transcends time. Following the speeches and wreath-laying, Mr Guy mingled with those present, and told the Greek Herald that he has attended Greek celebrations at the Shrine before, but this year was more meaningful to him.

“Greek Independence symbolises how a strong-willed people, against all the odds, can defeat an evil enemy even with overwhelming numbers,” an emotional Mr Guy said, adding that people in Ukraine are inspired by this and feel a bond with the Greeks that gave them “our cyrillic alphabet, our Orthodox religion and now we’re looking for the courage that you guys had against the Turks in 1821”.

“My mother’s family is still in the East and so they are hanging on, they make Molotov cocktails to give a good welcome for everyone who comes into their village. But it’s not fighting for the sake of it, it is, like the Greeks of 1821, fighting and standing up for their independence, for their religion, for their families, for their culture and their beliefs.

“And that’s of great inspiration for many people. And I’m proud for so many Greek Australians who have never given up on celebrating that. They’ve been in Australia, some families, for 80 years and they’ve never given that up.”

Young Greek children, the next generation, were far fewer in attendance than in the past, due to the cancellation of the large parade. Loukia Andrews, a teacher at Aetolean College’s Reservoir Campus, told the Greek Herald that all schools were given a choice to attend. “We were asked if we were interested in taking part and our response was ‘yes’,” she said.

Aetolean student Andriana said she had attended previous events pre-COVID, but felt this year was special.  “I think it’s going to be a better experience because I am older and will suck up more of the information,” she said.

Mr Tsourdalakis told the Greek Herald he was very pleased with the event on Sunday. He said a parade may take place next year, possibly not at the Shrine. “One of the reasons one did not take place this year is because it needs to be planned months in advance and we were still seeing restrictions in February,” he said, adding that 90 per cent of schools had given a negative response when invited to take part in the event.

Shrine of Remembrance CEO Dean Lee was present at the event, but there was no mention to anyone whether the Greeks this year had redeemed themselves following the events in 2019. Mr Kenos said, “Today, they were happy with what we did, and we can continue like this in the future.” He added, “we can talk about bringing some students back.”

Sotiris Sotiriou of Pegasus dancing school would like to see this. “It is quite another thing to have the passion of thousands of children with their parents and grandparents cheering them on,” he said. “It is a different vibe, but we had no choice but to keep it at this level this year.

“I hope it is the last year like this.” 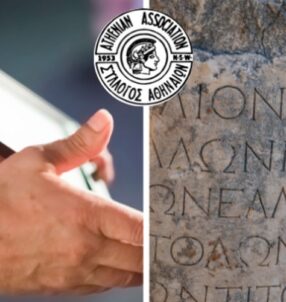