You are here: Home  /  HEALTH  /  South Africa’s omicron Covid outbreaks may already be running out of steam
HEALTH Omicron outbreaks in South African hotspots may be running out of steam less than three weeks after the new variant was identified, data suggests.

Cases in the province of Gauteng – which had surging infections from November – appear to be levelling off, while seven-day infections in Tshwane, one of the early epicentres, are now “relatively flat”.

Although recent days have brought large spikes after a computer update led to an extra 37,875 cases being included in the daily count, experts have pointed out that the increases are far shallower once averaged by specimen date.

Louis Rossouw, of the Covid-19 Actuaries Response Group in South Africa, said that although the country had surpassed the peak of previous waves some areas were beginning to see a lull.

“Case growth is steeper than last week but still has slowed down versus November,” he said. “In Gauteng, cases are still levelling off. Tshwane cases are relatively flat, with a slight increase in the most recent days.”

Statisticians in South Africa have also noted that the case fatality rate – the percentage of people who go on to die from an infection – has fallen considerably since the arrival of omicron.

With the delta variant, around three per cent of infections – one in 33 – were resulting in death, but now that figure has slumped to 0.5 per cent – one in 200 – the lowest it has been throughout the pandemic in South Africa and 10 times lower than in September last year.

Some experts claim there has not been enough time for the death data to catch up with infections and that the case fatality rate will rise in coming weeks as infections start to translate into hospitalisations and deaths.

But Peter Streicher, a research associate at the University of Johannesburg, pointed out that the infection to death lag in South Africa is just 10 days because most cases are only picked up once they arrive in hospital, when many are already severe. It means omicron should have been visible in the death data by now.

“Omicron is extremely mild. The rest of the world has nothing to fear.”

His modelling also suggests cases in Guateng have peaked and the total deaths caused by the wave will be around 640 – about four per cent of South Africa’s delta wave, which saw 15,400 deaths.

Several doctors and researchers have also argued that omicron is likely to be a milder disease even if it is more infectious. The South African Medical Research Council found that very few hospitalised patients with the variant needed oxygen or were admitted to intensive care.

Harry Moultrie, a senior medical epidemiologist at the the National Institute for Communicable Diseases in South Africa, said it appeared cases and hospital admissions were showing signs of “decoupling”, suggesting previous infections or vaccinations were still providing protection from severe disease even if they were not stopping infections.

In Britain, just 10 people have so far been admitted to hospital with omicron, and there has been one death.

At a briefing in London on Monday, Matthew Snape, professor in paediatrics and vaccinology at the University of Oxford, said the South Africa data suggested vaccines and previous infections were giving some protection against the variant.

“In areas where we know omicron has been circulating for a bit longer, such as in South Africa, they are not seeing severe disease, maybe because they actually still have enough cross-reactive antibodies,” he said.

Figures show younger patients are also making up more hospital admissions than in previous waves. Prof Alastair Grant, of the University of East Anglia, believes the current hospitalisation rate for omicron is likely to be 20 per cent less than delta because it is most common in 20 to 40-year-olds who are less likely to be admitted.

Harsha Somaroo, a public health medicine specialist who is part of the team analysing data for the Gauteng Department of Health, told The Conversation Africa that between 7.4 per cent and 52.1 per cent of admissions are patients admitted for other conditions who have also tested positive for omicron.

Currently in Britain, around 27 per cent of patients in hospital with Covid have other conditions as their primary reason for admission. 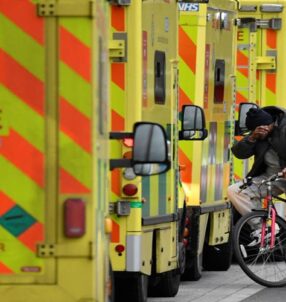