Tiger Woods spoke out after some of the world’s best golfers paid tribute to him on Sunday as he continues his recovery from a horror car crash.

Golf stars wore Woods’ signature red shirt and black trousers on the final day of the WGC-Workday Championship in Florida.

It’s the outfit Woods is famous for wearing on the concluding day of tournaments – and the likes of Jason Day, Tony Finau, Tommy Fleetwood, Sebastian Munoz, Rory McIlroy and Patrick Reed all emulated his style.

The 15-times Major winner said his fellow competitors and fans were aiding him in his recovery from serious leg injuries which threaten to end his illustrious career.

He said on Twitter : “It is hard to explain how touching today was when I turned on the tv and saw all the red shirts.

“To every golfer and every fan, you are truly helping me get through this tough time.”

Grounds crew at the Puerto Rico Championship also wore red and black in tribute to Woods, who was told by doctors he was lucky to be alive following his crash in Los Angeles County last Tuesday.

Woods has worn red and black on Sundays since his early days as a golfer, and previously said he was inspired to do so by his mother Tida.

“I wear red on Sundays because my mom thinks that that’s my power colour,” Woods has said. “And you know you should always listen to your mom.”

The WGC-Workday Championship was won by Collin Morikawa, who fittingly emulated one of Woods’ achievements before saying: “I want to say thank you to Tiger.”

Morikawa joined Woods as the only player to have won a major championship and WGC event before turning 25.

Afterwards, the 24-year-old told the Golf Channel: “Tiger means everything to me.

“Yes he had the crash and thankfully he’s all right and hopefully he has a quick and great recovery, but I don’t think we say thank you enough so I want to say thank you to Tiger.

“Sometimes you lose people too early. I lost my grandpa about a month ago and you don’t get to say thank you enough.”

Woods, who has won 82 PGA Tour events, said on Friday he was “in good spirits” after he was moved to a new hospital to continue his recovery.

The 45-year-old is now being treated at LA’s Cedars-Sinai Medical Center, which is renowned for its work rehabbing athletes.

He was moved to the centre on Friday after undergoing surgery at the Harbor-UCLA Medical Center, where his leg was put back together with a rod, screws and pins.

Woods had suffered open fractures to his tibia and fibula and further injuries to his foot and ankle.

After his move to the Cedars-Sinai Centre, Woods’ family announced that early follow-up treatment had been successful.

“The procedures were successful, and he is now recovering and in good spirits.”

“Tiger and his family want to thank you all for the wonderful support and messages they have received over the past few days. We will not have any further updates at this time.

Woods had been taken to the Harbor-UCLA Medical Center after being pulled from his car following his crash in Rancho Palos Verdes, California on Tuesday.

Woods survived “what would otherwise have been a fatal crash” last Tuesday morning because the interior of his vehicle remained largely intact, according to Los Angeles County Sheriff Alex Villanueva.

The police chief added that “deputies at the time did not see any evidence of impairment” after arriving on the scene at 7.18am local time and confirmed on Wednesday that Woods was “not drunk” and that the crash was “purely an accident”.

Woods was already sidelined following a fifth back operation at the time of the crash.

And he faces a huge challenge to resurrect his trophy-laden career due to the severity of his injuries.

Over the weekend, orthopedic surgeon and former PGA Tour golfer Bill Mallon said it would  be at least three months before Woods is able to walk.

“With fractures of this sort in the lower extremities, it takes about three months to heal enough to fully bear weight,” said Mallon, quoted by The Sun. 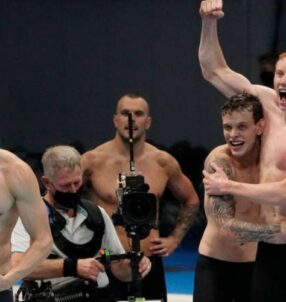