You are here: Home  /  UK NEWS  /  ‘Time to distinguish’ between those who have and have not had a COVID jab, Tony Blair says
UK NEWS ‘Time to distinguish’ between those who have and have not had a COVID jab, Tony Blair says

Tony Blair has said it is “time to distinguish” between people who have and haven’t had a coronavirus vaccine.

Mr Blair’s remarks came as it emerged that 13.5 million first and second doses of a COVID-19 vaccine were given out in May, setting a new monthly record.

The ex-Labour leader also described the NHS app that proves someone is vaccinated as “inadequate”, and warned it needs to be simpler and more effective.

His remarks came in response to a new report by the Tony Blair Institute for Global Change, which says “vaccine status matters” and that health passes can “allow citizens to prove their status in a secure, privacy-preserving way”.

The report’s authors said that, if a health pass system was used at home and abroad, “we can move beyond blunt, catch-all tools and align with other countries by removing certain restrictions for the fully vaccinated, thereby enabling us to sustainably reopen the economy”.

And they added: “For as long as the world goes largely unvaccinated and the risk of a new variant remains significant, it’s vital that we have an alternative to the blunt tool of lockdowns to enable the country to live freely and safely.”

Mr Blair said: “It is time to distinguish for the purposes of freedom from restriction between the vaccinated and unvaccinated, both for citizens here for domestic purposes; but also for our citizens and those from other countries in respect of travel on the basis that being vaccinated substantially reduces risk.”

The 68-year-old, who served as PM from 1997 to 2007, made it clear that this would involve discriminating between the vaccinated and unvaccinated, adding: “Other than for medical reasons, people should be vaccinated.”

In response to his remarks, a senior government source told the PA news agency: “Once again Mr Blair appears to have learned of things already in the pipeline and decided to publicly call for them.

“It’s becoming something of a habit. Nonetheless we thank him for his continued support.”

Meanwhile, people who have been contacted to bring forward their second coronavirus vaccine appointment are being urged to rebook as soon as possible.

© Reuters Some 13.5 million first and second doses of a COVID-19 vaccine were given out in May – a new monthly record

Last month, the Joint Committee on Vaccination and Immunisation recommended that the interval between doses should be reduced to eight weeks for the clinically vulnerable, as well as everyone over the age of 50.

The move aims to combat the spread of the COVID-19 variant first detected in India, also known as the Delta variant.

Overall, more than 1.7 million people have been sent texts by the NHS that invite them to reschedule their appointment.

Dr Emily Lawson, the NHS lead for the COVID-19 vaccination programme, said: “The vaccine is our most effective weapon against the virus and there has never been a more important time to get protected.”

More than half of adults in England are now fully vaccinated, with 23,077,511 people having received both doses.

Some 33,525,485 people – more than three-quarters of the country’s adult population – have received their first dose.

All of this comes as the government “draws up other options” before making a decision on whether to completely lift COVID restrictions on 21 June.

While Number 10 is still planning to go ahead with the final step in the roadmap, it is waiting for more data before taking any decisions.

Options under discussion are said to include retaining the wearing of face masks in certain settings, or delaying the end to legal limits on social contact until July.

Until now, the government has only ever said there is “nothing in the data” to suggest ending lockdown should be delayed.

Conservative MP Andrew Bridgen told Sky News the “public appetite” for restrictions could “wane very quickly” if all measures are not removed on 21 June.

He added: “Lockdowns were there to protect the NHS. We know hospitalisations are a fraction of what they were at the peak. We’ve been told we’ve got to get used to living with this virus. Living with the virus doesn’t mean we have to be in lockdown forever – that’s not a solution.”

Meanwhile, an NHS boss has told Sky News that vaccines appear to have “broken the chain” between catching coronavirus and becoming seriously ill.

Chris Hopson, the chief executive of NHS Providers, said while the number of people in hospital with the variant first detected in India, also known as the Delta variant, was increasing, it was much lower than what was seen in previous waves.

On Saturday, the UK reported another 5,765 coronavirus cases – significantly up on the total on the same day last week, but down on Friday’s two-month high. 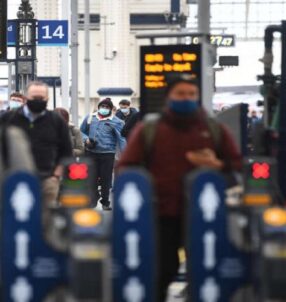