Britons can expect heavy snow showers across large parts of the country from Friday, November 26. The latest snow depth maps produced by WXCharts show huge areas of the country turning a shade of white as wintry flurries spread further south on the weekend of November 27-28.

Up to nine inches (24cm) is expected to accumulate across north western parts of Scotland by Sunday, November 28, the maps suggest.

The Met Office has updated its forecast for next week and warned “snow likely across higher ground and possibly falling to low levels at times.”

The Met Office long-range forecast from November 22 to December 1 added further south there is “a slight chance of some wintry weather”.

BBC weather forecasts “Icelandic air” will hit the UK towards the end of next week, sending temperatures plummeting towards freezing across most of the country. 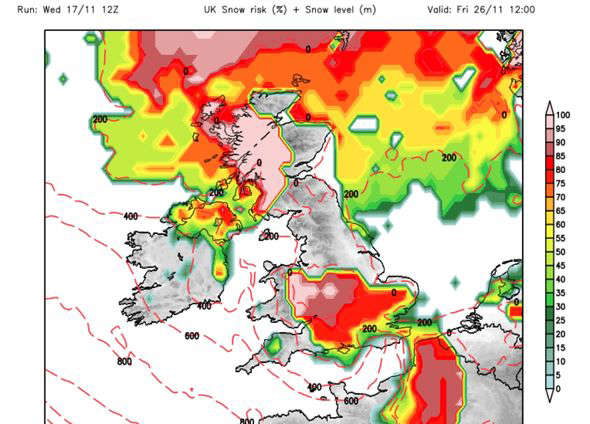 The latest maps produced by Netweather.TV show the risk of snow across the UK increases sharply from next Wednesday.

The model shows a dark area of red moving across western parts of Britain from the North Atlantic.

The threat of wintry weather explodes by next Friday, with snow risk models covering Scotland, the north of England and the South East turning a shade of red, this indicates the chance of snow is above 70 percent.

Strong winds are set to push the colder air in a southeasterly direction next Friday and into the weekend. 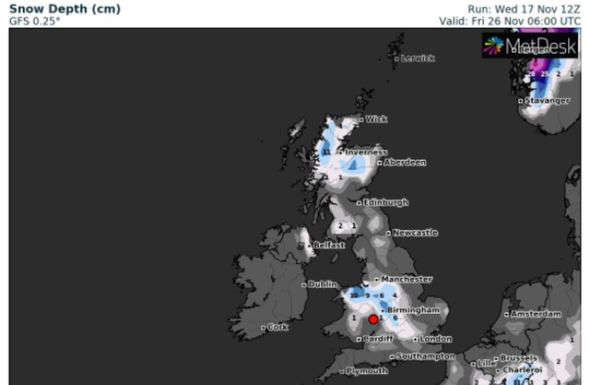 Snow depth maps suggest western parts of Scotland can expect four inches (11cm) of snow, 10cm in Wales and 6cm in the Midlands by 6am on Friday, November 26.

Wintry flurries are poised to strengthen and move further south in the following 24 hours.

Snow charts suggest eight inches (22cm) is set to accumulate in the north west of Scotland by 6am on Saturday, November 27.

In northern parts of Wales up to five inches (13cm) of snow is set to fall, three-and-a-half inches (9cm) in the Midlands and less than one inch (2cm) in the South. 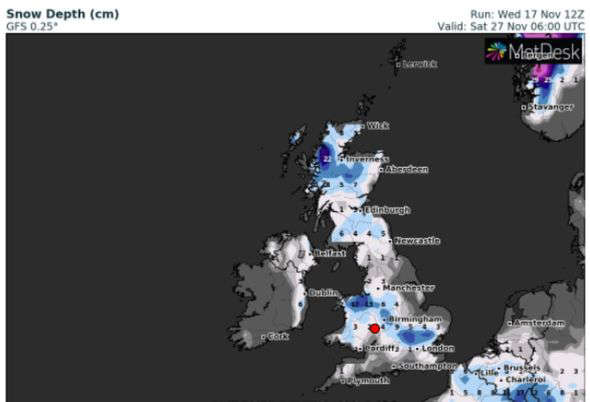 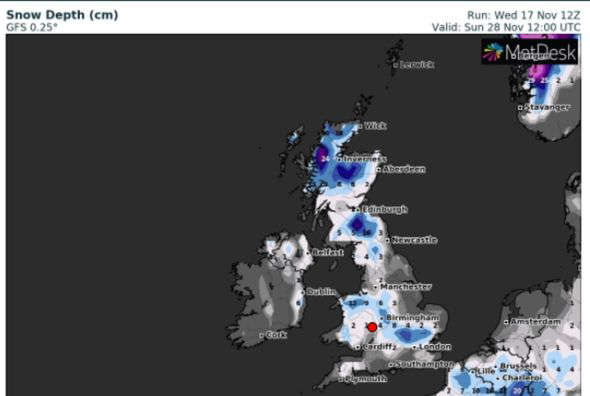 The Met Office long-range forecast for next week says: “High pressure will often lie close to western or southwestern parts of the UK during this period.

“This will tend to bring to a colder than average north or northwesterly airflow for a time. The most unsettled conditions will likely be across northern areas.

Here, showers or longer spells of rain are likely with snow likely across higher ground and possibly falling to low levels at times.

“Strong winds are possible across the north, especially around coasts. Further south, it is likely to remain somewhat drier with fewer showers, but there is even a slight chance of some wintry weather here.

“At points when winds ease any clearer and calmer conditions that prevail will lead to some cold nights with frost and fog.”

The BBC long-range forecast from November 22-29 added: “A drier but cooler pattern is likely to begin the week, as high pressure becomes more established to the south of Iceland.

“A secondary push of colder Icelandic air is expected to arrive during the latter half of the week, which will further drop temperatures. Sharp frosts may occur during some evenings late in the week.

“A few spells of rain showers and even some patchy snow showers may feature as part of this secondary cold push, mainly in Scotland, which may also experience an uptick in winds as the week progresses.”