You are here: Home  /  INTERVIEWS  /  Archon Michael Psaros Speaks about the “Miracle” of St. Nicholas Church at WTC
INTERVIEWS Archon Michael Psaros Speaks about the “Miracle” of St. Nicholas Church at WTC

BOSTON – Michael Psaros, Archon of the Ecumenical Patriarchate, member of the Executive Committee of the Archdiocese, and vice chairman of The Friends of St. Nicholas, the organization that has assumed the historic responsibility for the completion of the construction of the St. Nicholas Greek Orthodox Church and National Shrine in Lower Manhattan, spoke to The National Herald on the eve of the twentieth dark anniversary of 9/11.

Psaros, a man of deep faith in Christ and His Church, a well-known philanthropist, and a renowned global businessman, replied to the TNH’S question about when St. Nicholas will be completely ready to start worship services, said “the National Shrine will be completed by April 2022 in time for Holy Week and Pascha. I cannot wait to hear the first proclamation of `XΡΙΣΤΟΣ ΑΝΕΣΤΗ! – Christ is Risen at the National Shrine by His Eminence, Archbishop Elpidophoros of America.”

The National Herald: On the eve of the twentieth dark anniversary of 9/11, what are your thoughts about the first time the St. Nicholas Shrine will be lit up and vespers will be performed there?

Michael Psaros: The lighting of the National Shrine for the first time is an epochal event for the Holy Orthodox Church, for the global Hellenic Community, for Ground Zero, for New York City, for New York State, and the United States. The lighting of the National Shrine is a true miracle and an absolute triumph for our Church and Ethnos. It is also a triumph for America and the American ideal.

We have successfully constructed Holy Orthodoxy’s missionary witness to the world. His Eminence, Archbishop Elpidophoros of America, often reflects that the National Shrine will also be the Orthodox Church in the world most visited by non-Orthodox and even non-Christians.

TNH: What message does this ceremony give to the faithful of the Archdiocese, the Greek-American Community, to our beloved country the United States, and to the World?

MP: The ceremony on Friday Night is literally the victory of light over darkness, of good over evil, of the Holy Resurrection over death. It represents the resurrection of Ground Zero, New York City, and America.

The National Herald The icon of Christ Pantokrator, which will be placed on the inner summer of the dome of St. Nicholas. (Photo provided by iconographer Fr. Loukas)

TNH: Archon Michael Psaros, The National Herald has been following your tremendous efforts and hard work the last two years for the completion of St. Nicholas. I am wondering how did you manage to do it given all your other responsibilities, to your business, your family, your children, your social and ecclesial life, and the travel they require?

MP: Mr. Kalmoukos – one word – `diakonia’. This is the most important undertaking of my life except for being a father, husband, son, and brother.

TNH: The Organization The Friends of St. Nicholas has raised over $60 million since January 2, 2020. At one point in April and May of 2021, you raised $1 million a week for almost ten consecutive weeks.

MP: I am humbled to be part of the Friends of St. Nicholas. This very small group of remarkable Trustees undertook this Ministry when nobody thought it could or would succeed. This group of Trustees, each of whom is among the most accomplished Americans (not just Greek-Americans), acted with humility, conviction, faith, and sheer force of will. The Trustees put their names and reputation on the line to pursue this mission. Their tireless service, faith, and determination were the key to our success.

We would like to thank the relatively small group donors and donor organizations that made the National Shrine a reality. We thank them for their extraordinary `philotimo’, philanthropy, and faith. They understood. They believed. They acted not just with words or best wishes, but with very significant donations. They made the National Shrine a reality. Our donors are the `joyful givers’ as is referenced in the New Testament.

We have raised approximately $60 million since January 2, 2020. We raised almost $45 million between January 2nd and April 1st of 2020. In January 2020, the Spanos Family of California, demonstrating unparalleled philanthropic leadership and vision, donated $10 million.

You are correct, at one point in April and May of 2021, we raised $1 million a week for almost ten consecutive weeks as a result of the success of our `Donor Wall’. All donors who contributed $100,000 or more will have their names inscribed on a free-standing wall outside of the National Shrine with a commanding presence of the Park and Ground Zero.

Αssociated Press Workers install thin panels of marble on the dome of St. Nicholas Greek Orthodox Church and National Shrine, which is the only house of worship on ground zero, on Friday, Sept. 2, 2021, in New York. (AP Photo/Jessie Wardarski)

TNH: How did you accomplish all this?

MP: The leadership of His Eminence, Archbishop Elpidophoros of America. He restored the dignity and credibility to the Archdiocese that was the necessary condition for the success of St. Nicholas. If anyone disagrees with me, they should ask themselves to compare an abandoned Church project, the single biggest embarrassment in the history of the Greek-American community, to the triumph and reality of today. On the day of his Enthronement, he proclaimed that the completion of the National Shrine was one of the top priorities of his new Ministry in America and our community validated his vision and Archpastoral exhortation.

The extraordinary service and leadership of Father Alex Karloutsos is the Alpha and Omega of the entire undertaking. Father Alex played a foundational, inspirational, and leading role in this effort for the past twenty years. The lighting of the National Shrine belongs to Father Alex and Presvytera Xanthi. He will now guide and mentor Father Andreas Vithoulkas, who is the new `Proestamenos – Head Priest’ of St. Nicholas. On a personal level, due to my involvement with the Church and the FOSN, I have learned more from Father Alex than he will ever know.

I must also recognize and thank FOSN Chairman Dennis Mehiel, whose overall leadership and credibility with the State of New York and the Port Authority were beyond critical to our success. How do I thank my brother, John Catsimatidis – well John is John.

I do not know how to thank Richard Browne, our volunteer COO. Without Richard, we couldn’t have reached this extraordinary moment. I also would like to thank Lou Katsos for his support of Richard.

We must also recognize and thank Mr. Rick Cotton and Mr. Steven Plate of the Port Authority of New York and New Jersey for their extraordinary commitment to the St. Nicholas National Shrine. AXIOI!

Αssociated Press The inside of St. Nicholas Greek Orthodox Church and National Shrine is seen under construction on Thursday, July 22, 2021, in New York. (AP Photo/Jessie Wardarski)

TNH: Tell me, are there times that you think that all this is a dream?

Archon Michael Psaros: It is not just a dream – `einai megalo thavma – it’s a miracle.’ Mr. Kalmoukos, I wish I had one dollar to give to the Church for every time I have told his Eminence, Archbishop Elpidophoros of America, `einai thavma”! So many things had to go right. So many people had to feel the faith and inspiration. So many prayers had to be said and answered. And here we are.

TNH: Do you think of those innocent souls who were lost twenty years ago in that horrific terrorist attack Do you think that St. Nicholas will be a place of comfort and constant reminder as a place of martyrdom?

MP: The National Shrine is the cenotaph to those who were martyred and murdered on that horrific day twenty years ago. The media often writes that 3,000 people died that day. They did not die. They were martyred and murdered because of who they were – Americans. Their physical bodies were destroyed. Most were never buried. That is the awful reality. That is why this National Shrine belongs to the martyrs and their families as the only House of Worship at Ground Zero. Thei Memory will be eternal.

TNH: Approximately when do you think St. Nicholas will be completely ready to start worship services?

MP: The National Shrine will be completed by April 2022 in time for Holy Week and Pascha. I cannot wait to hear the first proclamation of “ΧΡΙΣΤΟΣ ΑΝΕΣΤH – Christ is Risen’ in the National Shrine by His Eminence, Archbishop Elpidophoros of America.

TNH: What will St. Nicholas mean to future generations of Greek-Americans, but also to Americans of every ethnic background?

The Friends of St. Nicholas would like to thank the Diamataris Family, the National Herald, and you, very personally, Mr. Kalmoukos for your support from the first day we announced the creation of FOSN to complete the construction of the St. Nicholas Church and National Shrine. We thank you for boldly advocating our Ministry and Mission, when so many others had given up hope. I believe the most powerful word in our language is `PISTIS – FAITH’ and you believed. You believed not because of FOSN but through your demonstrated decades-long commitment to Holy Orthodoxy and our Church in America. 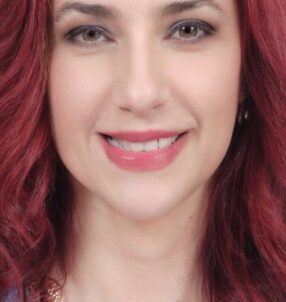