You are here: Home  /  GREEKS ABROAD  /  Archon Stephen Cherpelis to Be Honored with the OXI Day Award
GREEKS ABROAD Archon Stephen Cherpelis to Be Honored with the OXI Day Award

WASHINGTON, DC – Stephen Cherpelis, Archon of the Ecumenical Patriarchate and well-known benefactor of the Church, the Greek community, and Greek education will be honored with the OXI Day Award presented by the Washington Oxi Day Foundation on Thursday, October 28, at 2:30 PM at the National World War II Memorial. There will be a reception at 6 PM and a dinner and program at The Capitol View at 7:30 PM.

The Oxi Day Award is given each year to a person, living today in any part of the world, who has taken courageous action that contributed to the promotion or preservation of freedom and democracy.

The Oxi Day Award is inspired by the David vs. Goliath story of Greece’s actions during World War II and the incredible courage displayed by the Greek people. At the time, the free world watched as one by one 11 countries across Europe surrendered to Hitler’s Axis forces. At 3 AM on October 28, 1940, a representative of the Axis Forces arrived at the Prime Minister’s residence and demanded Greece’s surrender. The Prime Minister replied with a single world — OXI — No.

The OXI Day events will begin on Wednesday, October 27 with a reception at the Greek ambassador’s residence in Washington. A wreath will be laid at the Arlington National Cemetery on Friday, October 29 at 9 AM.

Stephen Cherpelis served in Korea with the United States army from 1960 to 1962 as a Sergeant in the Military Police, 3rd Army, 2nd Infantry Division, stationed at Kimpo, Ascom area command servicing the DMG 38th parallel.

Cherpelis also served as President of St. Nicholas Church, Flushing, NY, where the Hellenic School bears his and his wife Arete’s name. He was honored by his All-Holiness Patriarch Bartholomew for his participation in the opening of the Cultural Center of E.R.T.O. in Constantinople.

He serves as benefactor of the St. Nicholas Church in Havana, Cuba; was honored by the St. Michael’s Home for the aged; was honored by the Gala of the Archdiocesan Cathedral of the Holy Trinity; was decorated with the prestigious Medal of Ellis Island; serves as benefactor for the St. Nicholas Church and National Shrine; and was a Founding Member of the Ecumenical Patriarch Bartholomew Foundation.

When asked him how he feels that the Oxi Day Foundation, founded by Andrew Manatos, will honor him this year, Cherpelis told The National Herald that “I consider it a great honor because on October 28, 1940 I was four years old in my village of Agalianos, Aitoloakarnania, the bells rang that we were at war and everyone ran. All men aged 40 and under showed up at the village church and went to enlist in the army.”

He said that “I left Greece as a child and did not have the opportunity and honor to serve in the Greek Army, but I served with honor and pride in the U.S. Army in Korea.”

It was Cherpelis’ dream to come to America and he realized it when he was 19 years old. He said: “At that time, the American army was not volunteer and mercenary, but you had to go and enlist, which I did with many other acquaintances, relatives and friends who came from Greece the same year. Of all the people I mentioned to you, I was the only one who was recruited. We all received a card, the others’ said 4F and mine said 1A and no one knew the difference from one to the other.”

“I was immediately drafted and sent to Fort Dix in New Jersey for training,” Cherpelis continued. “A week later, General Guidera called me to his office. He was a brave man, tall, thin. The first thing he asked me was ‘what do you want in my army?’ and I replied that I was recruited. He told me that ‘you are not an American citizen’ and I replied I enlisted and I have the green card. He kept saying to me in a savage tone ‘but you do not want to be in the army’ and I replied that since I was a child I prayed daily to God to let me come to America and now that I came and God gave me this gift after that I proudly enlisted and will serve. If I were in Greece, I would be a soldier there as well, and since America called me, it is now my home, I will serve it.”

“He again told me sternly ‘yes, but you are a communist’ and I answered no, I am in America because I was destroyed by the communists, I am a refugee of the communist guerrillas. The communists burned my village. He asked me ‘what is your village called?’ and I answered Agalianos. He asked me again ‘when was your village burned’ and I answered him on July 29, 1947. And immediately he took papers out of his drawer and said ‘yes, right, I have everything here’ and he even showed me the high school diploma that I finished at the top of my class. He knew everything. He was testing me. He told me ‘go back to your base.’”

Cherpelis said: “When I went, the base sergeant named Davis showed me a jacket with my name on it and a stripe. The general called him and told him until Cherpelis got there to put his insignia (stripes) on his jacket and tomorrow morning I want him back in my office. When I went to his office he said ‘I want you to sign for five years and I will send you to the West Point Academy to become an officer.’ I told him I cannot because my family is in the village, they are poor and I work to help them. He told me that ‘if you bring me proof that you are sending them money, the American Army helps all its soldiers’ and specifically from that time my father in Agalianos received a respectable amount from the American Army every month. He told me ‘I will send you to Fort Gordon Georgia to become an army police officer, and from there you will go to either Germany or Korea and do not worry, your parents and siblings will be provided for financially.’”

Cherpelis continued: “He took me one day and he became my sponsor and I got my American citizenship earlier than I would have. And so I went to Korea at Kimbo Air Base. It was very difficult. The country was devastated, there was no tree, no house, just poverty and misery because the North Korean communist invaders had taken over all of Korea down to Injam. NATO invaded there, in fact there was a battalion of Greek soldiers. At the time I served there were only five Greek officers left with whom we became friends, they came and I took care of them in Kimbo. When I was discharged, I went straight to the village and married Areti and on Thursday, we celebrated our 59th wedding anniversary.” 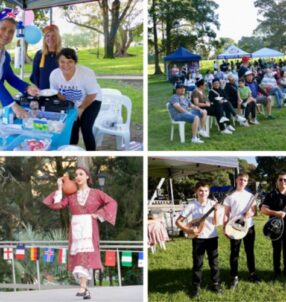