Australia has moved dozens of troops, police and diplomats to the Solomon Islands, as violent protests continued for a second day.

Australia’s prime minister Scott Morrison announced the deployment on Thursday after he received a formal request from his counterpart under the nations’ bilateral security treaty.

Violent demonstrations erupted in the island nation on Wednesday when people stormed into the parliament to demand the resignation of prime minister Manasseh Sogavare.

Mr Sogavare imposed a 36-hour curfew describing it as “darkest days” of the country.  However, rioters defied lockdown and continued to protest on the streets through Thursday.

Mr Morrison said Australia is sending a deployment of 23 federal police officers, and up to 50 more to provide security at key infrastructural sites as well as 43 troops, a patrol boat and five diplomats to calm the situation.

“Our purpose here is to provide stability and security,” he said. He added that the deployment will last for a few weeks after their arrival on the Solomon Islands on Thursday night and Friday.

Anger has been brewing in the country, especially Malaita island, over a host of domestic issues, including neglect from the central government over infrastructure promises.

The Malaita province, which has cultural connections with Taiwan, has also opposed a 2019 decision by Mr Sogavare to end diplomatic relations with Taiwan and form stronger ties with China.

Taiwan has accused China of “dollar diplomacy” while Beijing said it “highly commends” the decision to sever diplomatic ties.

Images shared on social media showed smoke emanating from the buildings set on fire by rioters in the Chinatown district of capital Honiara. Looting of stores and arson continued on Thursday.

Announcing the curfew, Mr Sogavare said he “witnessed another sad and unfortunate event aimed at bringing a democratically-elected government down”.

“I had honestly thought that we had gone past the darkest days in the history of our country,” he said. “However, today’s events are a painful reminder that we have a long way to go.”

Meanwhile, the Australian government is holding an urgent meeting to review the unrest on the island nation.

As Australia is itself witnessing strained ties with China, Mr Morrison clarified that his intention was not to “intervene in the internal affairs of the Solomon Islands”.

“Our presence there does not indicate any position on the internal issues of the Solomon Islands,” Mr Morrison added. 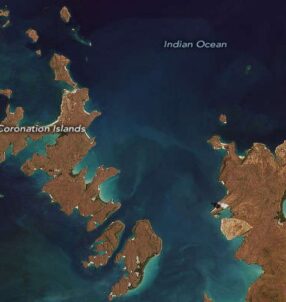