Diego Costa was never going to go quietly. It just wasn’t in his nature.

When he celebrated a goal, his pumped up veins would bulge from his muscular arms and he would let out an almighty roar as he ran towards the crowd.

Or when he clashed with another player on the pitch, he would give them a trademark scowl and goad them into losing their temper. A true master of the “dark arts”.

It started off brightly. Jose Mourinho signed Costa for £32million after his exploits at Atletico Madrid and he scored 20 league goals in his first season at the club as he guided them to the Premier League title in 2014-15.

When Mourinho left, Costa was reportedly one of the players to have “downed tools” to get rid of the Portuguese, something he later denied.

Enter Antonio Conte. Costa was the main man under the Italian in his first season and recovering from a poor season in front of goal, he scored 20 goals as the Blues lifted the title again in the 2016-17 season.

But after winning two titles and a League Cup in his three years at the club, Costa had just about had enough of life in west London. He struggled with the English language and hated the food, the weather too. He missed his family.

He wanted out, and began instructing his agent Jorge Mendes about finding him a new club. First it was Chinese Super League club Tianjin Quanjian who came in with a monster £76m offer for the Spain international, then it was Atletico Madrid after Tianjin pulled out.

All of this was bubbling away in the background while Conte was on the verge of guiding Chelsea to their fifth Premier League title. Costa was then dropped for a match against Leicester in May 2017 after a training ground row with fitness coach Julio Tous and from there, his future appeared untenable.

But what happened next was simply extraordinary, even by Costa’s standards.

Instead of the striker pushing to leave the club, Conte stole a march in mind game battle, reportedly texting the striker telling him he was surplus to requirements and that he should find a new club.

It left the striker stunned. The club were not happy either, having been in talks with clubs to sell Costa. When news emerged over the breakdown in relations between the two parties, his value sunk.

He had been told to train with the reserves at Cobham but such a command went down like a lead balloon. Costa often lived by his own rules and, despite having a contract with two more years left to run, he went AWOL, opting to return to his hometown of Lagarto in Brazil.

Footage would later emerge of Costa playing street football with friends, riding quad bikes and enjoying his summer, just like any 28-year-old man would — blissfully unaware that one of the biggest clubs in the world were preparing to take legal action.

As Chelsea prepared for the opening weekend of the season, Costa was some 5,000 miles away on another continent and short of actually travelling to South America to retrieve him, there was little they could do about it.

The Blues decided to fine Costa two weeks’ wages, who accused the club of treating him like a “criminal” after speaking to the Daily Mail while holed up in Brazil. Meanwhile, Mendes was working to get him back to Atletico.

It always felt like Costa was teetering on the edge at Stamford Bridge, despite his wholly impressive goal return of 52 goals in 89 league appearances for the club.

He had developed a reputation for becoming embroiled in heated battles on the pitch and that often saw him targeted by opposition defenders, hoping to trigger his hostile temper.

But the remarkable thing was his ability to get the other side wound up. Amongst his most notable clashes, he had his eye almost gouged out by Mousa Dembele, riled up Seamus Coleman and played the role of pantomime villain in getting Arsenal ’s Gabriel sent off in a fiery derby back in 2016.

There was a method to his madness and that was what endeared him to Chelsea fans. As long as he was in their side, they loved him. The same could not be said for everyone else, even if there was a begrudged admiration for the way he pulled around defenders and bullied them.

But for all the times they chanted “Diego! Diego!”, they never got to say goodbye.

In September 2017, Chelsea agreed to sell their wantaway striker for £57million to Atletico, with Costa joining up with the LaLiga giants for training. He was not eligible to play until January but after missing pre-season, he would need the time to recuperate and regain his fitness.

After his first season at the club, it seemed he was content with life again, working under his trusted mentor of Diego Simeone and scoring seven goals in 23 games. In Madrid, he was back in the land where he spoke the language and his theatrics on the pitch were appreciated rather than criticised.

Still, he could not resist aiming a dig at his former coach Conte and absolved himself of the blame after his controversial departure. What’s more, he seemed to take pleasure in his demise at the club.

“It was a very bad moment, but it wasn’t my fault,” he told Marca.

“People said things, but time puts everything in its place. Look where the coach is, look at Conte,” he said, referencing the fact Conte had been sacked after Chelsea finished fifth in 2017-18.

“I was wrong going to Chelsea, because of their way of dealing with things. Cholo [Simeone] is a direct coach, and when he doesn’t love you, it’s clear and he shows it.

“At Chelsea it was the opposite. I had the option of returning to Atleti and when Chelsea told me to go back to training with the reserves, I was clear that I was going back to Atletico, even though there were other offers.

Conte was not going to allow that version of events to stay unchallenged on the public record and attempted to correct the situation, accusing Costa of repeatedly attempting to engineer a move away from the club.

“For sure, the truth, we know the truth,” Conte told The Telegraph. “The player, his agent, the club and I.

“This is the truth and, honestly, in my career I want to have players who are concentrated on my team and not to consider my team a second choice. My team must be the first choice.

“It was an incredible season and I managed, together with the club, the Diego Costa situation in the best possible way. But, in the end, the truth was only that the player wanted to leave many times to Atletico Madrid and during the season to go to China because he wanted the best contract.”

Fast forward to 2021 and Costa’s words have come back to bite him. He failed to rediscover his best form in his three seasons at the Wanda Metropolitano, scoring only 19 goals in 81 appearances. The Brazilian-born frontman was allowed to terminate his contract with Atletico in December 2020, with a move to Wolves failing to materialise.

He headed back to Lagarto and has been there ever since. While he appears to be enjoying his ‘funemployment’ at the age of 32, the future of his football career has never looked bleaker. Conte, meanwhile, has added another league title to his burgeoning collection of trophies after guiding Inter Milan to their first Scudetto in 10 years.

But the Italian tactician is currently unemployed after resigning from his role amid disagreements over the club’s financial position, which forced them to sell Achraf Hakimi. He turned down the chance to take over at Tottenham and seemingly missed out on the Real Madrid job.

In some ways, the pair have gone full circle in the four years that have elapsed since their fallout. But while they remain unattached, don’t expect them to share a drink in Lagarto together anytime soon. 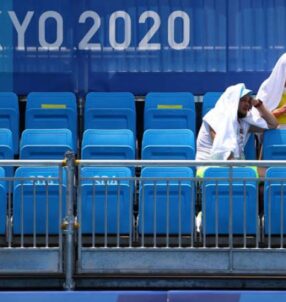