Doubts have surfaced regarding the timing of Novak Djokovic’s Covid test. The Serbian was granted a medical exemption based on testing positive for the virus last month.

However, a document presented by his lawyers to federal court in Australia included two Covid (PCR) test certificates, one with a positive result on 16 December and one with a negative result six days later.

The serial number on his positive test appears to be out of sequence with a sample of Serbian tests gathered by the BBC during that period.

The number is higher than the negative test result he provided.

The discrepancy was discovered by German research group Zerforschung, who penned a blog titled “Novak Djokovic’s time-travelling PCR tests” and were in partnership with German news outlet Der Spiegel who first reported the story.

The acting director of Serbia’s official health body submitted a document confirming the test dates on both Djokovic’s covid tests are accurate.

To further explain the anomaly, the BBC conducted some research and produced a graph illustrating the dates and codes of covid tests from other Serbians as well as the world number one during the time.

Each dot on the graph above represents a single confirmation code on a test certificate they obtained.

21 tests were provided by BBC colleagues based in Serbia, as well as a further 35 from a Serbian research scientist Milovan Suvakov.

The findings showed the confirmation from all the tests issued by BBC Serbian colleagues, in addition to the batch from Suvakov, which illustrated that the earlier the test result date, the lower the confirmation code.

The only test that didn’t match this pattern, was the one that belonged to Djokovic from December 16.

It is understood that each of the Serbian’s tests were processed in different laboratories, which could explain the difference in confirmation codes.

But some of the tests issued to the BBC were conducted in the same lab as the 20-time grand slam champion and both have lower confirmation codes.

“There is always the possibility for a glitch,” says Djordje Krivokapic, a specialist in data and digital security. 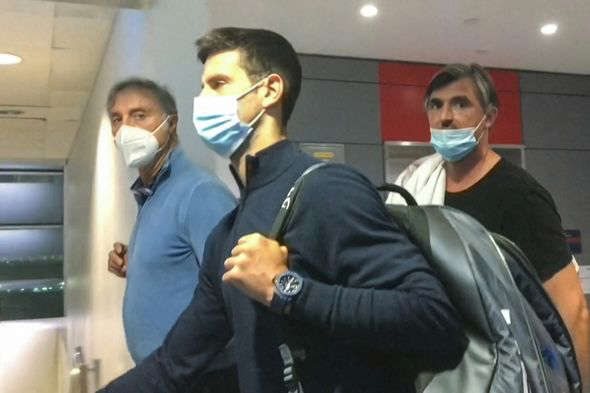 “But if that were the case, there would be a simple explanation,” he says. “I don’t see why the state authorities wouldn’t just say that.”

Djokovic was ultimately denied the chance to compete at the Australian Open after his visa was cancelled not once but twice.

The cancellations and his ultimate deportation were not based on the grounds of covid test legitimacy, but due to his presence in the country risking fanning anti-vaccine sentiment.

The Serbian is due to return to action next month at the Dubai Open, a tournament he was won five times in the past.