You are here: Home  /  HEALTH  /  Experts who fear Covid could raise the risk of dementia
HEALTH Experts who fear Covid could raise the risk of dementia

On the tail of the Spanish influenza pandemic that killed some 50 million people worldwide at the end of World War I, a strange crippling illness spread through Europe, causing severe lethargy, nerve problems, headaches and confusion.

Scientists named the syndrome encephalitis lethargica — and it is estimated to have afflicted more than one million people at the time, according to the journal Brain.

Thousands were left with permanent neurological damage that rendered them all but comatose. The 1990 hit film Awakenings dramatised the neurologist and author Oliver Sacks’s attempts to revive victims who had been trapped for decades in motionless, speechless passivity.

Many experts believe that encephalitis lethargica was an after-effect of Spanish flu and that the virus travelled to victims’ brains through their noses, triggering the syndrome’s devastating symptoms.

Now we are starting to witness something alarmingly similar in the wake of the Covid-19 pandemic, and neurological experts fear history could be repeating itself.

Several studies have warned that the coronavirus may invade patients’ brains by travelling up the olfactory nerve, which runs from the upper part of the nose to the olfactory bulb — the brain’s smell centre. From there, the virus can establish an infectious base and perilously spread into other regions.

Chinese research published in April, in the journal Signal Transduction and Targeted Therapy, found the virus was using this pathway to the brain in infected rhesus monkeys.

In July, a University of Southampton study in the journal Brain Communications affirmed Covid-19’s ability to cause serious mental problems. The study of 267 infected patients with neurological symptoms found 11 per cent had delirium, 9 per cent had psychosis and brain inflammation, and 7 per cent had other encephalopathies (any widespread disease of the brain that alters its function or structure).

‘It was striking that some of these conditions occurred together within the same patients,’ says lead author and neurology specialist Dr Amy Ross-Russell. ‘This suggests Covid-19 can affect multiple parts of the nervous system in the same patient.’

Such symptoms often abate after Covid infection has subsided. However, in some, the virus can cause enduring neurological problems.

The National Institute for Health and Care Excellence, the NHS treatment watchdog, says that long Covid — which is estimated to affect more than two million people in the UK — can involve neurological problems such as ‘brain fog’ (loss of concentration or memory issues), insomnia, nerve problems and delirium.

Dr David Strain is a co-chair of the British Medical Association’s medical academic staff committee, and a senior clinical lecturer at the University of Exeter.

He told a BMA expert meeting in July: ‘Most of these patients had relatively minor initial infections, like a significant flu-like illness, yet they have been left with a catalogue of symptoms such as fatigue, brain fog and pain throughout all their muscles.’

Dr Strain said there is plenty of historical precedent, adding: ‘The biggest example of how a virus can leave lasting neurological damage is Spanish flu. Since then, there have been many other post-viral manifestations from other epidemics [such as the Middle East respiratory syndrome outbreak in 2012]. So it was no surprise at all that long Covid came about.’

The longer-term brain problems caused by Covid infection may prove unprecedented in their scale and depth, according to a U.S. report in The Lancet in July that warned of an impending dementia epidemic. The study, led by Roy Parker, a professor of biochemistry at the University of Colorado Boulder, predicts that patients with substantial chronic brain inflammation — as may occur in long Covid — could develop high levels of abnormal brain proteins. These proteins, known as tau, are strongly linked with dementia.

‘There could be similarities between post-Covid complications and the 1918 pandemic,’ Professor Parker told Good Health.

‘It remains possible that long-term consequences of infectious diseases [such as long Covid] would include some types of neurodegenerative disease.’ The sheer number of Covid infections means that we could see a spike in the number of dementia cases, he added. Follow-up studies of neurological dysfunction in survivors of Covid-19 are essential, the report warns.

‘Such studies should persist for at least a decade and focus on young individuals [aged 30 to 40],’ he says. These must include blood tests to check for tau proteins.

This is to avoid mistakenly detecting people who may already be experiencing tau protein build-up and cognitive problems due to early onset dementia.

Sadly, he adds, such monitoring may not actually help people with dementia caused by Covid. ‘There is nothing that can be done — right now, at least — to stop the formation or progression of tau problems,’ he says.

‘There is a big risk for younger people such as fortysomethings with Covid, as it may cause dementia in later age that they would not otherwise have developed,’ he told Good Health. ‘In 20 years’ time we may see people with new mental problems emerging.’

Some other viruses are already known to cause dementia. If HIV enters the brain, ‘it is associated with a 50 per cent increased risk of getting dementia from the build-up of tau proteins’, says Dr Chan.

‘Given the vastly bigger numbers infected with Covid-19, an increased risk that was even a fraction of HIV’s would translate to a very large number of affected people,’ he warns.

He is particularly worried by the fact that Covid-19 appears to enter via the olfactory nerve, which takes it into the brain’s olfactory bulb.

‘I was alarmed when this was discovered, because there is a big fat pathway that goes from the olfactory bulb to many parts of the brain that are associated with Alzheimer’s,’ he says. ‘It’s like a motorway, and we know that viruses can travel it.’

In particular, the olfactory bulb is linked to the hippocampus, which is involved in forming memories, and the entorhinal cortex — a hub for memory, navigation and the perception of time. Studies show this cortex is the area of the brain that is most heavily damaged in Alzheimer’s disease.

As for when widespread neurological problems associated with long Covid might start to emerge, Dr Chan says: ‘We don’t know the timescale because of the uncertainty about how long the virus will take to interact with tau proteins in the brain, and then for dementia to develop.’

Regardless, Dr Chan says the dementia threat underlines the need for us to keep taking precautions against Covid.

‘You really don’t want to be catching it,’ he says. ‘If you are an adult post-40, there is a significant possibility that this may increase your risk of dementia.’

For those who’ve had Covid already, ‘there are things that could make a difference to your risk of developing dementia’, he adds.

‘We are beginning to see new drugs called biologics on the horizon that may help to stop dementia in future. In 2035, when Covid-driven dementia may appear, there’s a chance that these may be in place to help.’

Biologics are genetically engineered proteins that target the parts of the immune system that fuel inflammation. It is hoped that by reducing damage caused by brain inflammation, the drugs can help to stave off dementia.

A study last year examined more than 140,000 patients who take biologics for their rheumatoid arthritis. The research, presented to the American College of Rheumatology by investigators at New York’s Hospital for Special Surgery, found that those on the drugs had a 17 per cent lower incidence of dementia than those on conventional medications.

His research in Neurobiology of Aging in 2018 found that being sociable has by far the most significant preventive benefit.

‘Try new activities rather than watching TV, do regular exercise and maintain a healthy weight. We have missed out on doing these things through more than a year of social isolation. We all need to do more,’ he says. 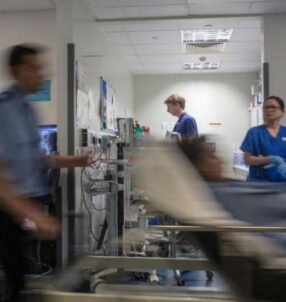