READING, PA – Greek-American Michael Constantine, the Emmy-winning character actor known for his role as the school principal on the popular TV series Room 222 and, then 30 years later, as the patriarch in the hit film My Big Fat Greek Wedding, died on Aug. 31 at his home in Reading, PA, the New York Times reported. He was 94.

His death was from natural causes, his agent, Julia Buchwald, told the Times.

Constantine began his career on the Broadway stage and with a gift for performing foreign accents, he played a variety of ethnic characters throughout his career.

Among his ethnic roles, Constantine played several Jewish characters, including Walt Whitman High School principal Seymour Kaufman on ABC’s Room 222 which ran from 1969-74. He won an Emmy for the role in 1970.

“He also played Italians, on shows including The Untouchables and Kojak; Russians, as on the 1980s series Airwolf; a Gypsy in the 1996 horror film Thinner, adapted from Stephen King’s novel; and, on occasion, even a Greek or two,” the Times reported, adding that his “gravitas… often led to him being cast as lawyers or heavies.”

He also appeared as in guest roles on several shows, including Naked City, Perry Mason, Ironside, Gunsmoke, and Hey, Landlord in the 1960s, and Remington Steele, Murder, She Wrote, and Law & Order in the ’80s and ’90s.

It was Constantine’s role as Gus Portokalos, the tradition-bound father of the bride in 2002’s My Big Fat Greek Wedding that expanded his fame to a wider audience. “An immigrant who made good as the owner of a Chicago diner, Gus is an ardent amateur etymologist who can trace any word to its putative Greek origin,” the Times reported, noting that “kimono… comes from `cheimónas’ — Greek for winter.”

The character Gus “is also a fervent believer in the restorative power of Windex, applied directly to the skin, to heal a panoply of ailments like rashes and boils,” the Times reported.

“He’s a man from a certain kind of background,” Constantine said of his character in a 2003 interview with The Indianapolis Star. “His saving grace is that he truly does love his daughter and want the best for her. He may not go about it in a very tactful way. So many people tell me, `My dad was just like that.’ And I thought, `And you don’t hate him?’”

“My Big Fat Greek Wedding, which also starred Lainie Kazan as Gus’s wife and Nia Vardalos and John Corbett as the young couple, was a surprise international hit,” the Times reported, adding that “the film took in more than $360 million worldwide, becoming one of the highest-grossing romantic comedies of all time.”

The son of Theoharis Ioannides, a steelworker, and Andromache Foteadou, Constantine was born Constantine Ioannides in Reading, PA, on May 22, 1927, the Times reported, noting that “the family name is sometimes Romanized Joanides.”

“He settled early on an acting career, an idea reinforced after a youthful visit to a friend who was studying acting in New York,” the Times reported.

“I just knew I belonged there,” Constantine told Odyssey, an English-language magazine about Greek life, in 2011, the Times noted. “They could make fun of this hick from Pennsylvania, but I just belong here — this is me.”

Constantine “studied acting with Howard da Silva, supporting himself with odd jobs, among them night watchman and shooting-gallery barker,” the Times reported, adding that “he became an understudy to Paul Muni playing the character modeled on the famed defense lawyer Clarence Darrow in Inherit the Wind, which opened on Broadway in 1955.”

Compulsion, a 1957 Broadway dramatization of Meyer Levin’s novel about the Leopold and Loeb murder case, featured Constantine as the defense lawyer, a role he took over from Frank Conroy who had suffered a heart attack during previews.

Brooks Atkinson wrote in the Times, “Michael Constantine gives an excellent performance as the prototype of Clarence Darrow. He avoids the sentimentality that the situations might easily evoke and plays with taste, deliberation, color and intelligence.”

Constantine’s other Broadway credits include Anagnos, the director of the Perkins Institute for the Blind in the original cast of The Miracle Worker (1959), and Dogsborough in Bertolt Brecht’s antifascist satire Arturo Ui (1963).

Constantine’s first marriage to the actress Julianna McCarthy ended in divorce, as did his second to Kathleen Christopher, the Times reported, noting that his survivors include two sisters: Patricia Gordon and Chris Dobbs, according to his agent’s statement. A complete list of survivors was not immediately available at press time.

Though his long career included many critically acclaimed roles, Constantine knew he would be remembered best for My Big Fat Greek Wedding. He told his hometown newspaper The Reading Eagle in 2014, “I can’t tell you how many times I’ve autographed a Windex bottle,” the Times reported. 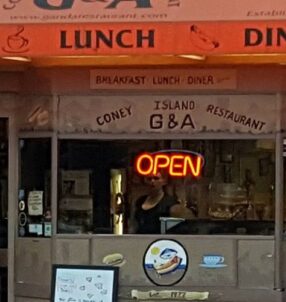