Jim Londos: The Humble Shepherd Who Conquered the Wrestling World

The story of Jim Londos — born Christos Theofilou — could be described as the archetypal story of success.

Theofilou was just another young, impoverished Greek who decided to move to the United States in the early 20th century — only to become one of the most prominent sports figures of his time.

Londos was born in Koutsopodi, Argolis, Greece as the youngest of thirteen children of his parents, Theophilos and Maria.

He began his career as a humble shepherd; however, soon afterward, he decided to try his fate on the other side of the Atlantic, as millions of other Europeans were doing at that time, by emigrating to the United States.

Theofilou took dozens of jobs to get by, including construction jobs — and even posing in the nude for figure drawing classes, which were very popular at the time.

The young man’s father had actually been an amateur wrestler as well, but despite this, Christos had never really entertained the thought of becoming one himself.

It was only when he landed a job as a “catcher” in a carnival acrobatic act that he was exposed to professional wrestling with real athletes; he then began training.

Theofilou had his first match in 1912 when he decided to appear as Christopher Theophilus, an Anglicized version of his real name.

His matches attracted many fans, and his reputation grew quickly.

Theofilou changed his name to Jim Londos after gaining some popularity on the mat.

Londos’ reputation did not just grow in the US; he became a real national hero in his native Greece as well, following his rapid growth as a professional wrestler. 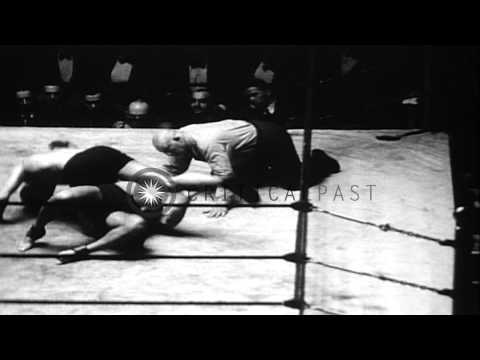 Newspaper clippings from the first half of the 20th century clearly show how his fellow Greeks adored him.

His matches in Greece attracted tens of thousands of spectators, making him a living legend of the time.

Londos made history with his superlative performances, eventually becoming known as ”The Golden Greek” due to his achievements.

He won multiple titles and competed in a total of 32 different countries.

Londos was renowned for his willingness to wrestle as often as possible and had a solid base of faithful fans on the East Coast during those glory days of professional wrestling.

A few years before his official retirement, Londos married Arva Rochwite, with whom he had three daughters: Diana, Demetra, and Christina.

After he retired, Londos dedicated his life to charitable causes such as the Greek War Orphans World War II Organization.

Because of his many years of philanthropic work, Londos was honored both by United States President Richard Nixon and King Paul of Greece.

Londos’ family lived in California, where the great man died in 1975, at age 81.