Labour has recorded its first poll lead over the Conservatives for almost a year in the wake of the row over Tory sleaze and second jobs, according to the latest Opinium poll for the Observer.

Keir Starmer’s party recorded 37% support, a single point ahead of the Tories. It is the first Labour lead with Opinium since January, when the UK was in the grips of a covid peak and the government had imposed emergency restrictions over Christmas. The Lib Dems are on 9%, Greens 7% and SNP 5%.

It comes after a week in which the government has faced severe criticism over its botched attempt to protect a former cabinet minister from a Commons suspension over lobbying and overhaul Westminster’s standards watchdog. Ministers also defended former attorney general Geoffrey Cox after it emerged he had been working for a month in the British Virgin Islands (BVI) during lockdown, earning thousands advising the territory over corruption charges brought by the Foreign Office.

Boris Johnson’s own approval rating has just slipped to a new low since last week. It now sits at -21, with 30% approving and 51% disapproving of the job he is doing. Keir Starmer’s approval rating is -6%, slightly up from -8 last week.

Johnson is now just one point ahead in terms of who people think would make the best prime minister, with 26% to Starmer’s 25%. However, both trail to the 34% of voters who opted for “none of these”.

There did appear to be support for a ban on MPs being able to take on extra paid work outside their job as an MP – 45% backed a ban and 25% opposed it. Conservative voters were also more supportive than opposed to a ban (42% to 27%). However, there was more support for banning extra work such as lobbying and consultancy, compared to other duties such as medical work by MPs trained as doctors or nurses.

“This is our first Labour lead since January but the red and blue lines have slowly been edging towards each since the end of the government’s vaccine bounce in May,” said Adam Drummond of Opinium. “While the various sleaze stories dominating front pages and have undoubtedly damaged the government, Johnson’s personal poll rating has been falling for some time, and the Conservative’s lead on “running the economy” has shrunk considerably.

“However, Johnson still has a 1 point lead over Keir Starmer on who would be the better prime minister and only 27% of voters agree that the Labour leader ‘looks like a prime minister in waiting’. It’s notable that it has taken over a week of continuously dire headlines, on a subject the Conservatives have always struggled with, for Labour to claw its way into the lead.” 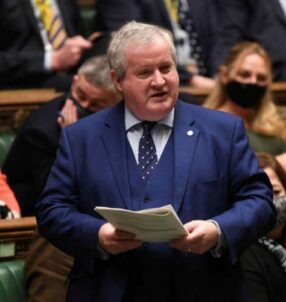