You are here: Home  /  CYPRUS  /  National Council urges Varosha refugees not to apply to IPC
CYPRUS National Council urges Varosha refugees not to apply to IPC

The National Council warned on Wednesday that possible claims by Varosha refugees to the immovable properties commission (IPC) over their properties carried risks because it furthers Turkey’s goal of partition.

After a four-hour session, the National Council, chaired by President Nicos Anastasiades, said in a statement that it discussed developments after Tuesday’s “unacceptable and illegal announcements by the Turkish side to change the status of part of the enclosed city of Famagusta, while urging Greek Cypriots who want to, to turn to the so-called commission.”

The National Council said in a statement it was briefed by Anastasiades and the foreign minister on all the steps taken by the Republic. Views were exchanged, and proposals were submitted by the parties over further course of action which the government will study.

The president’s top advisory body reiterated its joint position that the change of status of part of the fenced area of Famagusta from military to civilian, is a clear violation of the relevant UN Security Council resolutions, in particular resolutions 550 (1984) and 789 (1992) which call for the immediate transfer of the area under United Nations administration.

“These announcements crucially affect the prospects for the resumption of negotiations for a comprehensive settlement based on United Nations resolutions on Cyprus, international law, principles and values of the European Union,” it said.

The National Council said that Turkey’s goal with the new announcements is to further advance its plans to finalise the island’s partition.

Referring to the refugees, the statement said that “without ignoring the principle that respect for the individual right to property is a given and that no one can prevent the exercise of this right, the National Council notes that the possibility of appealing to the so-called Commission carries serious risks in relation to Turkey’s goals.”

It also called for unity in the effort to address Turkey’s new partitionist plans.

Anastasiades convened an extraordinary session of the National Council after the announcement that 3.5 per cent of the fenced area of Varosha would be demilitarised and property owners could come forth and claim their rights through the IPC, set up by Turkey in the north as a domestic remedy to the properties issue.

Foreign Minister Nikos Christodoulides was expected to hold a telephone conversation later in the day on this issue with his US counterpart Antony Blinken.

Addressing an International Coordinating Committee (PSEKA) online conference on Tuesday, Christodoulides said that “if the world does not react to Turkish President Recep Tayyip Erdogan’s new provocative actions, there can be no doubt that he will be encouraged to continue, not only in Cyprus, but also in the region where Turkey’s destabilizing role extends, in a manner that also undermines US interests.”
“Despite calls by the US, EU and the international community not to proceed on Varosha, President Erdogan today announced that they are changing the status of part of the fenced area of Varosha, where the secessionist entity in the occupied areas will be given control,” the Foreign Minister noted.
He said that these actions “are clearly violating the relevant United National Security Council Resolutions on Varosha which clearly state that responsibility for Varosha lies with Turkey and that control of the area must be transferred to the UN Peace Keeping Force in Cyprus.”

“The Security Council has been vocal on the matter of Varosha, and Turkey’s illegal activities, reiterating that no actions should be carried out in relation to Varosha that are not in accordance with UNSC Resolutions  and in this context called for the reversal of Turkey’s course of action, stressing the importance of full respect and implementation of its resolutions,” he added.
Christodoulides said that the international community, the United Nations, the United States – as a UNSC Permanent Member, as an actor that understands the importance of stability in the region of the Eastern Mediterranean – have a responsibility to react swiftly, decisively, responding to Mr. Erdogan in the only language he understands. The language of might and decisiveness. 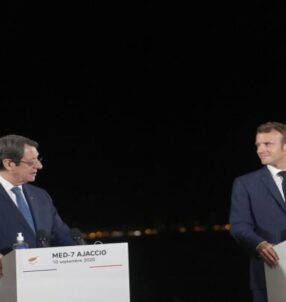