Russia test-fired the 6,670mph Zircon, or Tsirkon, hypersonic missile from the Admiral Gorshkov frigate in the White Sea. The weapon, which travels at five times the speed of sound, successfully hit its target at a distance of more than 400 kilometres.

The test comes amid escalating tensions between the West and Vladimir Putin over Russia amassing troops on the Ukraine border.

Russia previously successfully tested a hypersonic missile from a frigate in the White Sea on 18 November.

And last month, Moscow launched the Zircon from a submarine for the first time.

The weapon has been touted by the Russian President as part of his arsenal of supposedly unrivalled arms systems.

Russia’s defence ministry said that the Severodvinsk submarine had fired the missile in the Barents Sea, successfully hitting its chosen target.

Mr Borisov added that Moscow intends to maintain its lead.

He said: “We have broken forward, specifically, in the sphere of hypersonic weapons and based on new physical principles.

“We now have serious advantages in this regard over the leading Western countries – and will try to maintain this position.”

It comes as Russia has sparked fears of an invasion with its troop build-up on Ukraine’s border.

Last week, the US said “all options” are on the table in how to respond to Moscow. 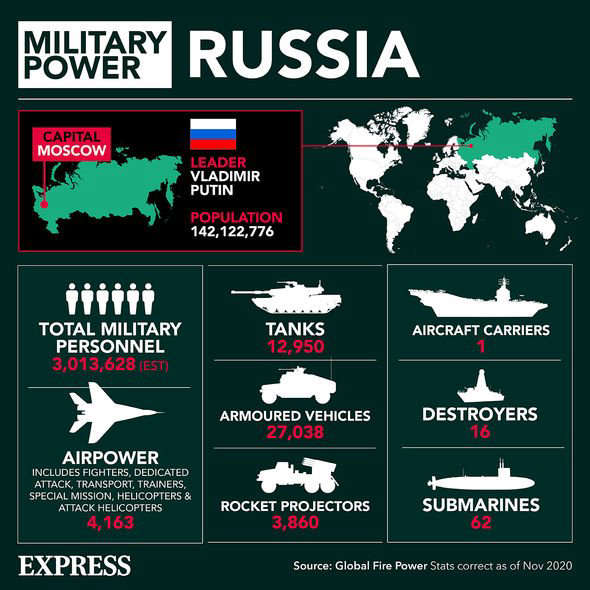 Assistant Secretary of State for European and Eurasian Affairs Karen Donfried said on Friday: “As you can appreciate, all options are on the table and there’s a toolkit that includes a whole range of options.”

US Secretary of State Antony Blinken is heading to Latvia and Sweden this week to attend meetings of NATO and the Organization for Security and Cooperation in Europe (OSCE).

She said: “It’s now for the alliance to decide what are the next moves that NATO wants to take.

“Next week, we will talk about our assessment of what’s happening on Russia’s border with Ukraine and we will begin that conversation of what are the options that are on the table and what it is that NATO as an alliance would like to do together.”

US, NATO and Ukrainian officials have raised the alarm in recent weeks over Russian troop movements.

The head of Ukraine’s military intelligence told the Military Times outlet that Russia had more than 92,000 troops massed around Ukraine’s borders and was preparing for an attack by the end of January or the beginning of February.

Moscow has dismissed such allegations as inflammatory and defended its right to deploy its troops as it wished.